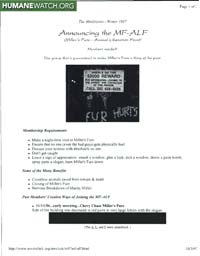 This file contains a copy of the Winter 1997 issue of The Abolitionist, a newsletter published by the animal rights group Compassion Over Killing (COK). That organization was co-founded (and its newsletter was co-edited) by Paul Shapiro and Miyun Park. Shapiro would later go on to lead the Humane Society of the United States’s farm-animal programs. Park was hired away to HSUS at the same time as Shapiro, served as a vice-president, and then moved on to lead the Global Animal Partnership.

In this issue of The Abolitionist, COK openly recruited readers to join a local segment of the Animal Liberation Front (ALF) targeting a Washington, DC-based fur retailer named Miller’s Furs. The ALF is an FBI-designated domestic terrorism group responsible for animal rights-related crimes including attempted murder and (literally) dozens of arsons.

Under Shapiro’s leadership, COK appeared to play both sides of the legal fence: The group published accounts and photos of several crimes (mostly vandalism) while also running a forked-tongue disclaimer stating that it “does not endorse (nor condemn) and illegal acts.”

Shapiro himself is pictures on page 6 of the PDF, holding a protest bullhorn. The photo is captioned: “Shut Miller’s Down, Run ‘Em Out of Town.”