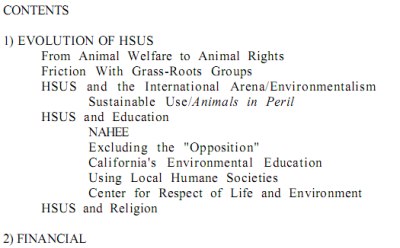 This is an unsourced, unfootnoted research dossier on HSUS leaked to HumaneWatch by an anonymous person who claimed it was written in 1996.

Here are some highlights:

Perhaps most eye-opening, though, will be pages 203-207, on which you can find a transcription of a 1990 HSUS flyer. It begins with language that modern readers would typically expect to hear from PETA:

The Humane Society of the United States has long been in the forefront of advocating the recognition of rights of and for animals. At its national membership conference held in San Francisco in 1980, the membership of The HSUS formally resolved to "pursue on all fronts … the clear articulation and establishment of the rights of all animals … within the full range of American life and culture." (emphasis added)