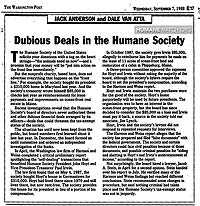 This document contains a collection of four columns by the late Jack Anderson, published by The Washington Post during 1988 (three columns) and 1991 (one column).

In these pieces, Anderson describes a financial scandal brewing at the Humane Society of the United States, related to unethical financial dealings between top HSUS executives Paul Irwin and John Hoyt and a secretive "Deferred Compensation Committee" of the HSUS Board.

The essays refer to a report prepared by the law firm of Harmon & Weiss, which described "self-dealing" by HSUS. The report concluded that HSUS had made "excessive compensation payments" to top HSUS staffers, payments which were not authorized by HSUS's full Board of Directors. These actions, the report added, "threaten the status of [HSUS] as a charity under the federal tax law and appear to constitute wasting of its assets."

Following the publication of the three 1988 columns and the Harmon & Weiss report, the California Attorney General issued an opinion that HSUS had "engaged in a course of conduct" that "violated" California's charity laws.

We believe reproducing this material constitutes a "fair use" as provided for in section 107 of the U.S. Copyright Law. If you wish to use this material for purposes of your own that go beyond "fair use," you must obtain permission from the copyright owner.