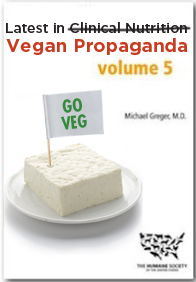 HSUS’s top MD, Michael Greger, puts out an annual DVD titled “Latest in Clinical Nutrition.” Greger’s spiel is that he searches through just about every English-language journal every day—some 12,000 articles last year, for example—so that we don’t have to. He then presents what he thinks is the most notable science, in what can amount to an hours-long lecture.

(Greger, by the way, says all the DVD proceeds go to charity. We’re not sure which one though. HSUS? PETA? But we digress.)

So what did the good doctor find this year? If you know anything about the propaganda mill that is HSUS, you already have an idea.

Greger basically dredges up studies to back his conclusion that a vegan diet (with vitamin B12 supplements) is the way to go. That’s fine for him to believe and promote, but it leads to some rather comical statements as he pushes his orthodoxy.

Greger insinuates that eating chicken can shrink a man’s, well, manliness, and even goes into detail about stool-size studies. All of this leads to laughable statements from Greger like “we may want to not eat pork, and maybe not anything made by anyone who eats pork.” (Exaggerate much?)

Like most HSUS propaganda, some of it seems plausible on the surface. But do a little digging, and it’s easy to expose the flaws.

Greger, for example, trots out a British researcher who attacks egg yolks for being high in cholesterol. The implication is that people shouldn’t eat eggs if they’re at risk for heart disease, which most people (he alleges) are.

But what do more reasonable experts say? The Harvard Health Letter in July 2006 declared it a “myth” that “eating eggs is bad for your heart.” (Harvard also helpfully points out that dietary cholesterol isn’t the same as blood cholesterol.) A recent USDA study found that eggs are lower in cholesterol than previously believed.

The Centers for Disease Control’s National Exposure Report finds that phthalate levels in people are well below the reference dose set by the EPA. Our bodies break them down quickly. And diet is just one way people are exposed to these chemicals.

Interestingly, the study Greger cites finds that fruit and vegetable consumption are associated with metabolites of at least two phthalates, while meat consumption generally is associated with one. And the British government’s National Health Service has noted this about a recent phthalates/reproductive-development study: “[E]vidence is too weak to form any definite conclusions.”

Starting to get the picture?

We’re sure we could sift through all of the studies that came out last year and find some to fit a narrative we create—hypothetically, for example, that soy milk causes brain cancer or that tofu causes strokes. One study does not a scientific consensus make; and some researchers believe that many studies are methodologically flawed.

And naturally, there’s plenty of research that Greger leaves out. One study, for example, found no association between red meat and higher incidence of cardiovascular disease. Another found no association between fish, processed meat, or poultry and colorectal cancer. Another determined that “higher consumption of poultry and fish may reduce the risk of ovarian cancer.” Another concluded that the positives of moderate consumption of lean red meat outweigh the possible negatives.

Hey, it’s not like Greger was short on time. This year’s DVD is half the length of last year’s.

Maybe these studies will make the cut over at Greger’s new “Nutrition Facts” website. But we won’t hold our breath.