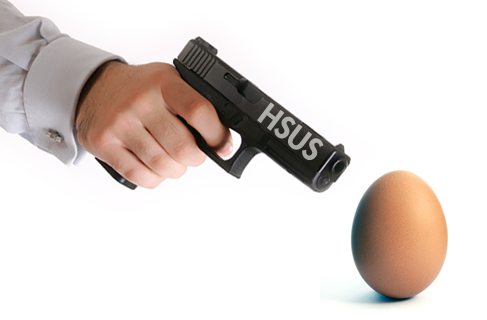 Britain’s supermarket shelves could be empty of key products within a month as an acute shortage of eggs threatens to have serious consequences for the country’s food chain. New EU rules banning the housing of hens in conventional cages are being blamed for what some in the industry are already labelling a “crisis”, as competition among food manufacturers to source eggs sends prices rocketing. The price of eggs on the EU wholesale market has nearly quadrupled over the past week to more than four euros a kilo.

“It’s now no longer a question of price, it’s a question of supply,” said one industry source who asked to be anonymous. “I estimate that within three to four weeks some companies will be at breaking point.”

France is also facing a potential crisis by suffering a 10 percent shortfall, with the price of eggs having skyrocketed 75 percent since last autumn. In all, the EU is targeting 13 countries that didn’t meet the deadline.

It’s the basic laws of supply and demand—higher production costs from the new infrastructure translate into higher prices, which mean less demand. Supply is likewise reduced, especially in the near-term if farms still using now-outlawed methods and can’t sell their eggs.

Now, we should caution that the EU producers weren’t asked to change overnight. They were given 12 years to do it. We’re not sure if some just didn’t care, or if they simply couldn’t afford to change. (In this economy, who could blame them?)

Whatever the reason, for British egg producers who did comply with the law, it’s unfair to allow the now-illegally produced (and cheaper) eggs to be sold and undercut them. And consumers and grocers are also in a bind. Here’s one example from a Sheffield seller:

The scramble for eggs is forcing him to charge £2.20 for a dozen large eggs – an £1 increase on what he normally charges.

Paul said: “I paid 30p per dozen more for the eggs I bought this morning than I paid for the same-sized eggs yesterday, it’s crazy.

“I have to pass that cost on to my customers who simply can’t pay those kind of prices.

So, cui bono? If you’re a group with a vegan agenda—like HSUS or PETA—this news is just dandy. Call it intended consequences. HSUS has said it wants to “get rid of the entire industry” and that “we don’t want any of these animals raised and killed.” (In a sad twist, some European producers have had to simply destroy their birds.)

Could this happen in the US? Remember, in 2008 HSUS pushed an initiative to require California farms to switch systems in just 7 years. It’s now pushing for a federal law to mandate incremental shifts across the country over the next 15-18 years.

HSUS doesn’t have to go whole hog and ban meat or dairy products. It just has to make them prohibitively expensive so that few people can afford to buy them. (Think about how it’s possible for California to ban foie gras.) And legislative mandates appear to be just the right way.

But for consumers—and producers—it’s looking like mandates drive chaos. Wouldn’t it be easier if change was driven by consumer demand (as it is now) instead of animal rights-backed government interference?