Even HSUS Donors Are in the Dark - HumaneWatch 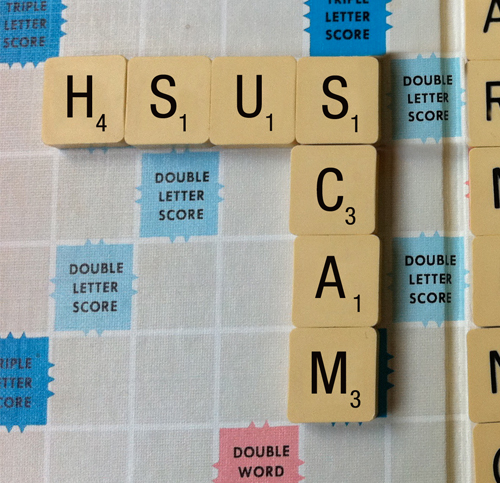 Not only did thousands of Americans see our national “Consumer Alert” ad and learn the truth about the so-called Humane Society of the United States, but many of our readers took action.

We drafted a report last month showing how HSUS’s TV appeals are deceptive. More than 85 percent of the animals shown are dogs and cats, yet just 1 percent of the money HSUS raises goes to pet shelters. HSUS also doesn’t run any pet shelters of its own.

We hear from HSUS donors on a regular basis—now former HSUS donors—who had no idea that so little of HSUS’s money—really, their money—went to pet shelters. Considering that HSUS spends more than $15 million on advertising and promotion (according to its tax return), this deception appears massive in scale. Accordingly, we asked people to file complaints with the Federal Trade Commission about this scam.

As of this writing, more than 140 complaints are pending with the FTC. It may be closer to 200 by now—the batch we received from the FTC doesn’t include any complaints filed recently. (Click here to download a PDF of what the FTC sent us. We suggest you right-click and select "Save Link As," as the file is 13 MB.) [UPDATE: This website has not verified the claims made to the FTC. We are simply reprinting them. Use your own judgment about relying on them.]

Additionally, we found about another 100 or so complaints from the previous years that appear to be against HSUS. (Some refer to simply “the Humane Society.”) Many of these are National Do Not Call list complaints.

Will the FTC take action? We’ll have to wait and see. In the meantime, here’s what some folks had to say. When even HSUS donors feel misled, there’s clearly something afoul:

“I pay $19.00 monthly and have been paying for a minimum of 6 months. I thought that they [HSUS] were the country’s clearing house and this way my little bit of money could help whichever Humane Shelter needed it.”

“They advertise they are helping animals, when only $1 out of $100 goes to help animals….My sister has sent them money thinking she is helping the animals, when in reality she’s helping promote vegetarianism!”

“HSUS uses false advertising that they are helping shelter animals, when in reality they donate a very, very small portion of their money to help these animals. I have contributed several hundred dollars over the last several years until I wised up!”

“I didn’t see any lobbyists on their commercials and believe they are misrepresenting their company. I wouldn’t have donated if I’d known this.”

“I run an equine rescue and we scramble for change to feed our horses. HSUS puts those dreadful misleading ads on TV and people send them money thinking they are helping groups like us.”

“I recently learned that HSUS is a sham 501(c)(3) and that only a tiny fraction of the funds I have given them over the years actually goes to assist animals in dire need. I plan to remove them from my will and only donate to local shelters…Their TV ads are extraordinarily misleading.”

“I and my family donated under the impression that our donations would help local pet shelters. If I had known the truth, I would NOT have donated to HSUS – I would have donated directly to my local shelters.”

“I feel the HSUS has advertised deceptively implying that my donation is used to help dogs and cats … I have donated hundreds of dollars over the years.”

“I have donated money in the past to the Humane Society of the United States and within the past few years have found out that they are not using the money to help animals, but to lobby against responsible breeders/farmers, etc…I feel I have had money taken from me to help a cause that I am not willing to help.

“I donate money to help out animals, but I didn’t realize that the HSUS did not help out our local shelters.”

“My mother-in-law believes she is helping out local animal shelter and protecting animals when she sees their ads and donates her money.”

“I have donated money to them on several occasions over the past years thinking it was helping the shelters from destroying more animals. I feel they should have to account for the donations they receive.”

“I was led to believe the money I sent was to go to the animals and feel I was deceived by the ads and they letters that were sent to me by mail.”

“It has come to my attention that HSUS does not support my local animal shelter with funds that I donate to HSUS. This is misleading and needs to stop.”

“I have been a volunteer for the Rogue Valley Humane Society for three years. Never has our organization received a cent for the HSUS as they claim they do!! Their advertising depicts them as having a shelter for animals when they in fact don’t.

“Their television advertising led me to believe that they were the national organization for all humane societies and that my money would have a direct impact on helping animals at the local level. I believe they intentionally misled me.”

“Their ads led me to believe that they were contributing most monies to the animals.”

“I donated money to this company to help shelter and rescue animals. I thought they gave money to state shelters and rescue groups, that is what they told me.”

“I sent money to HSUS for years thinking that they funded local SPCAs and animal shelters. … They do not help local shelters as they would have you believe through their ads and mailings.”

“After watching an advertisement on TV I signed up to give HSUS $19 per month for about 18 months now in the belief that the money went to help animal shelters and the animals in them….I have been deceived by their advertisements and recently cancelled my monthly contribution. It is beyond despicable that they can falsely advertise to deceive people in this way…”

“We donated to help with shelter animals…it turns out they do NOT even RUN a shelter!”

“Not only did I see the misleading ads on TV, I also got mail to become a member and did so up until now, when I found out only 1 penny of every dollar actually goes to the shelters. Very misleading!”

“I have donated several times in response to mail solicitations from the HSUS believe that I was helping shelter/rescue animals. I now know that that is not where my money went and I feel like I have been cheated.”

“Prior to my discovery many years ago (I do not have the exact date) that this organization does not use donations in the manner they IMPLY in their advertising propaganda, I had been sending them annual donations. I also discovered that my mother, an animal lover, had been sending them hundreds of her hard-earned dollars per year, THINKING she was helping animals.”

“I believe that I was deceived by its ads on both the television and along the road side. They indicated that my money was going to help cats and dogs and now I find out that it does not.”

“Their advertising is extremely misleading and deceptive. Once – and only once – did I give them a small donation several years ago. Then I learned the truth…”

“I have given money to HSUS thinking they were helping animals, only to find out that they are lining their own pockets and the pockets of lobbyists to end circuses, zoos, breeding, exhibiting of animals, etc.”

“My elderly mother (now 93) donated money to HSUS monthly for many years believing she was donating money to help animals in shelters. She was deceived into sending them money.”

“I was duped by the misleading advertising of the HSUS, sent them donations, and then found out that despite their clever name and heart-wrenching advertising propaganda, they are not using the majority of their donations to help animals.”

“I am a volunteer with the Pike County PA Humane Society and when I speak with potential donors and/or members I have often been told by the person I’m speaking with that they donate to the Humane Society of the United States in response to the TV ads that makes them feel so sad….I have heard this literally hundreds and hundreds of times….I can readily correct their understanding when I have the chance, but the extensive misleading TV advertising that gives the impression that our local needy cats and dogs are benefiting from a viewer support is like swimming against the tide.”

“I gave a donation to The Humane Society of the United States after seeing their commercials featuring animals in animal shelters without realizing that they actually give less than 1% to these shelters.”

“They mail out letters requesting a donation to help dogs and cats. They mail “calendars” & “address labels” and the elderly people who receive this mail think they must send in a donation for those items…I know because I receive their “donation request letter” and so do several elderly people in our neighborhood who receive the same mailing and they send money they really can’t afford to donate because of limited finances and illnesses.”

“Based on the TV ads I thought the donations would go to the local animal shelters to help abused animals only to find out that LESS than ½ of 1% of its $100-plus annual budget is given to local shelters for the help of abused animals.”

“I sent a cash donation to HSUS only to find later they spend less than 1% on animal shelters. Very deceptive TV ads.”

“I gave money to HSUS but I now believe that I was deceived by its ads. By watching their ads I truly believe that the HSUS directly helps abused, starved, abandoned animals with my dollars donated and directly helps local shelters with that money as well.”