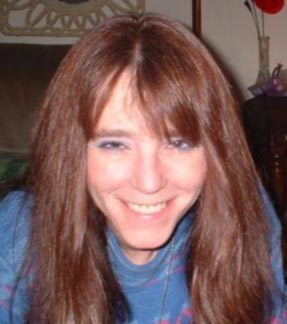 Meet Shari. She's a real person with a degree in veterinary technology. Shari lives in the Twin Cities area of Minnesota. We're not going to report her last name.

Shari is a married mother of "one child, two dogs, one cat" (at least according to her Twitter feed). All her pets are rescue animals, and her Cafe Press store is a one-stop shop for anyone who wants to buy pictures of them on t-shirts.

On Squidoo, you can read her expert opinion about how to make a great "bacon-cheddar chicken filet melt." She also writes passionately about why breed-specific legislation (BSL), laws aimed at just one or two breeds of dogs, are wrong-headed. ("It's like 'racial profiling' in people," she writes.)

Shari, despite all her apparent levelheadedness, is also using Squidoo to raise money for the Humane Society of the United States. Here's how she explains her decision to sponsor HSUS. We're not making this up (emphasis added).

I chose the Humane Society because 2 of my 3 pets came from there. I believe in what they do, and they are a non-profit organization. Almost all the workers are volunteers, and on top of that, they have this Mobile Animal Hospital thing that they drive around in. They find feral animals, spay and neuter them, then set them free again. Keeps the feral population down, as well as reducing the number of animals that get dropped off with them.

In the old days, The Humane Society would destroy animals after a certain amount of time. Nowadays, though, unless there's some serious health issues (the 120 cats euthanised recently in MN), the animals stay there until they find a home, or they die. With people dropping off their pets at an alarming rate, they need our help more than ever.

In Minnesota, there are three Humane Society Shelters. One in Coon Rapids, one in Golden Valley, and one in Eagan. The Coon Rapids one was just recently redecorated. In May, they sponsor the "Walk For Animals." That day people come from all over and walk with their pets to collect money for the shelters. I've never actually participated in it, but hope to some day.

Please make donations to this worthy cause. They need help now! Every purchase you make from this page will go to The Humane Society of the United States. You can't beat that!

Shari clearly has HSUS confused with her local humane societies, the real-life pet shelters whose volunteers do the heavy lifting.

The shelters in Coon Rapids and Golden Valley are part of the Animal Humane Society, and the Eagan facility is most likely the Minnesota Valley Humane Society. Neither organization is affiliated in any way with HSUS. So of all the money this well-meaning animal lover raises, not a penny will flow back to the organizations she actually intends to support.

Why doesn't Shari understand that Job #1 for HSUS is to phase out her beloved bacon-cheddar chicken sandwich? Is there an entree that HSUS's vegans hate more? Maybe a "turducken," but Shari encourages people to try that recipe too. Complete with a de-boning video.

Then there's the matter of breed-specific legislation related to pit bull terriers and other dog breeds. HSUS claims it's opposed to the concept, but saying that dog breeders and fanciers are skeptical would be an understatement. HSUS quietly pushed an Indianapolis ordinance aiming to label all “Pit Bull-type dogs” as “potentially dangerous," and promoted a Louisville law requiring the sterilization of pit bulls only—while offering the thinnest of excuses.

To quote an old movie, what we have here is a failure to communicate. How many more Sharis are out there? How many like her are easily misled celebrities or well-meaning corporate PR officers?

If you didn't already understand the enormity of the public misperception at work, there it is in all its pernicious splendor.

It's time to get to work.