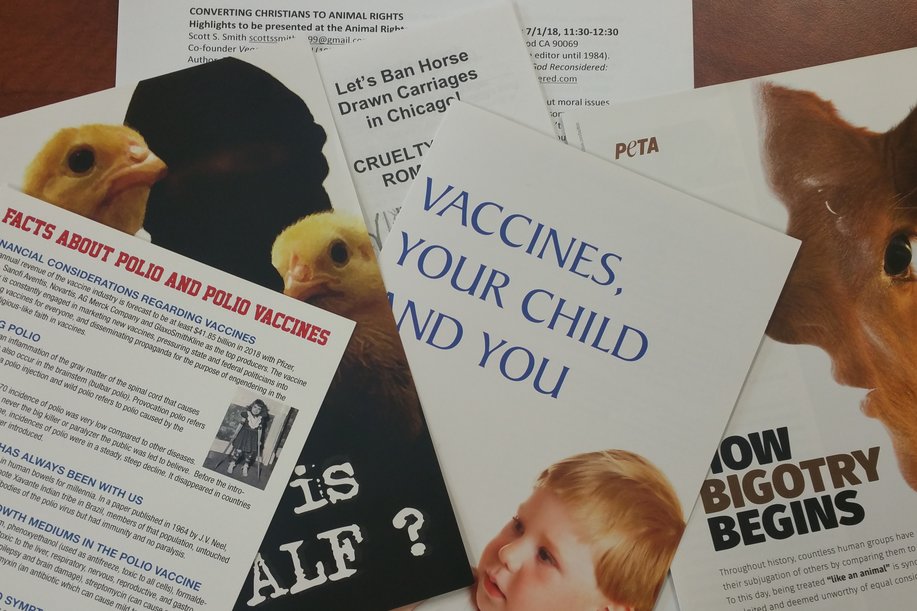 Lest one think that animal-rights terrorism has gone out of style, there were handouts promoting the Animal Liberation Front Press Office. The ALF is an FBI-designated domestic terrorist group; the “Press Office” claims to not be involved in the underground organization but will happily promote “communiques” from ski-mask-wearing criminals. One of the handouts was information about how to write to and support ALF operatives who had been arrested and imprisoned. The first piece of advice was, “Don’t discuss any illegal activity.”

Meanwhile, material from United Poultry Concerns led by kooky Karen Davis (who practically danced on Anthony Bourdain’s grave after his recent suicide) was also being distributed to conference attendees. The first story in their magazine was a ham-fisted (hen-fisted?) attempt to capitalize on the #MeToo movement by relating it to chickens. Did the chickens consent to that article?

Militant vegans weren’t the only conference-goers. Representatives of an anarchist website were handing out their own manifesto, laden with photos of black-clad rioters engaged in activities such as tossing molotov cocktails. The text itself criticized profit and private property, as well as yearning for “the founding crime of the society to come.”

The conference also attracted anti-vaxxers; one brochure being handed out was titled “Vaccines, Your Child and You.” A fear-mongering piece of literature, this brochure asserts there is a link between vaccines and autism. This claim goes against the advice of medical professionals and blatantly denies all of the scientific evidence regarding vaccines. What this has to do with animal rights remains unclear but it’s safe to assert there is a link between science-denying anti-vaxxers and the animal rights movement.

If the animal rights movement wants a semblance of legitimacy, they’ll need to disassociate from the underground criminal organizations, the science-deniers, and those who go for shock rather than substance. Until the fat is trimmed, it’s going to remain difficult to hear the rational voices amidst all  the clucking.