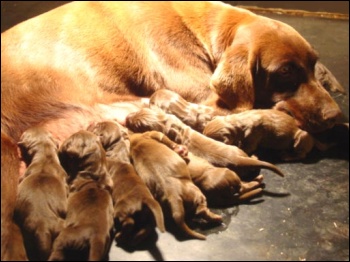 Did you ever notice how HSUS never manages to define its pejorative catch phrases like “puppy mills,” “factory farms,” and “canned hunts”? These phrases are often just cooked up to generate emotional reactions (and donations) from ordinary Americans. HSUS cleverly avoids having to define what these phrases mean.

But a look at the actual text of the new law reveals something entirely different. Let's see if we can figure out the answer to the age-old question: What is a puppy-mill, anyway?

(This copy is "marked up," but it's the same version that Iowa's Governor signed.)

Did you catch that?

The new Iowa law will only affect "commercial breeders" of cats and dogs. And it defines "commercial" breeders by identifying who isn't one.

Iowa's new law says a person with “three or fewer breeding [dogs] is not a commercial breeder.” So if you have just four dogs, and you sell their puppies, HSUS says you're a “mass-scale puppy production operation”—a “puppy mill.” Additionally, if you breed greyhounds for racing, all it takes is one dog, and you're a detestable puppy-miller.

We've always thought it was intellectually dishonest for HSUS to determine which farmers (or dog breeders) were "good" or "bad" based only on the size of their businesses. There are small backyard dog breeders who treat their animals horribly. And we've met dairymen with large operations whose milking cows (literally) sleep on waterbeds, and are treated like queens.

So if you're going to sling mud at someone whose animal-based career offends you, the least you should do it base your disgust on whether or not they take good care of their animals. That’s just basic fairness. But it seems HSUS has always chosen to draw bright-line cutoffs based on the size of a herd or the number of chicken coops you have. Big is bad, they say.

But now, if an Iowan has four dogs (of four different breeds, perhaps), and enjoys the hobby of breeding them for sale or for show, he or she is a social outcast. So … is anyone with four or more chickens or sheep a “factory farmer" now? Does HSUS consider anyone with four cats a "hoarder"?

So we're sorry to say we can now answer that question. Who's a puppy-miller? It might be you.