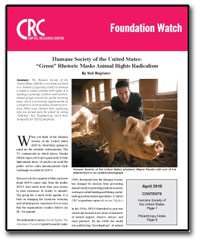 The latest issue of the Capital Research Center's Foundation Watch is out, and let's just say HSUS won't be stuffing them into the gift bags at its next Hollywood soiree.

Researcher Neil Maghami slices and dices the Humane Society of the United States in a feature essay subtitled "'Green' Rhetoric Masks Animal Rights Radicalism." It's definitely worth a read.

There are some gems in Maghami's copy that add new information to the national discussion about HSUS. Here are a few of our favorites:

[A]t the HSUS October 2009 annual general meeting in Washington, D.C. an announcement was made that HSUS had received ballots from 13,133 of its members to select the organization’s board members. Of these, 171 were discarded as invalid. That leaves 12,962 ballots. The meeting was called to order at 8:30 a.m., and closed by 8:44 a.m., a scant 14 minutes later.

Gee—just 13,000 HSUS "members" managed to vote in the Board-Member election? So much for the group's repeated claim of representing "11 million" Americans.

[One] HSUS board member, Persia White, also serves on the board of the eco-terrorist Sea Shepherd Conservation Society, a group known for its violent confrontations … In 2005, PETA named White, an actress and singer, as its “Humanitarian of the Year.”

That's true. We have no idea what sort of wisdom the star of TV's "Girlfriends" could have to offer an animal protection group. But the cross-pollination of HSUS's Board with that of the violent "Whale Wars" group is one of those things that makes me go "Hmmmm." So is the fact that Whole Foods Markets CEO John Mackey also sits on HSUS's Board. No wonder "whole paycheck" stores sell that newfangled HSUS-marketed vegetarian dog food.

[S]ome [HSUS grant money] goes to vegan groups that oppose the consumption of animals and the use of animal byproducts for human benefit. In 2008, for example, HSUS donated $10,000 to PETA, the notorious People for the Ethical Treatment of Animals.

How did we miss that? But there it is, right on HSUS's 2008 tax return (at the bottom of page 39). The cash went to a PETA address in Los Angeles that's listed in several online directories as an "animal shelter." (Uh oh … that probably won't end well.)