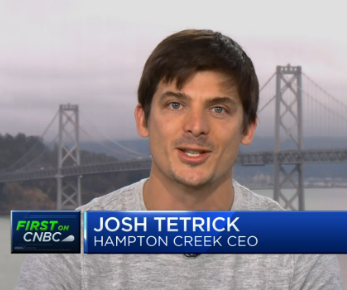 Fraud, phony science, an office paramour, and gullible youths: These are just some of the ingredients that make up the unappetizing reality of Hampton Creek Foods, according to a new exposé by Bloomberg. Founded by Humane Society of the US’s Josh Balk and fellow disciple Josh Tetrick, Hampton Creek has sought to create a “reset” on the foods we eat with its flagship vegan concoction, Just Mayo (“Just” meaning “righteous”). However, a recent Bloomberg report may force a Hampton Creek reset on its questionable business practices as federal authorities investigate.

Last week, Bloomberg blew the lid off Just Mayo when it alleged that not only had the HSUS-funded vegan startup hired gullible young vegans to buy back its Just Mayo in order to inflate sales and mislead investors, but that its R&D department had engaged in pseudo-science to develop its product.

According to Bloomberg, Hampton Creek began working with HSUS to recruit “cadres of impassioned young vegans” to “proselytize for Just Mayo and serve samples in store aisles.” Gifted with a free t-shirt, $12 dollars an hour, and a healthy dose of self-righteousness, these “Creekers” (named by Tetrick) set out on their quest to reset the food industry, serving dollops of vegan mayo on crackers.

Yet beginning as early as January 2014, a young “Creeker” revealed to Bloomberg that she was given a new assignment in an email entitled “Secret Shopper Squad Stores.” This Creeker was directed in the email to conduct a buyback of Just Mayo products from Whole Foods and was provided with a “BACKSTORY” to hide the reason of her irregular purchases. Over the next couple of weeks, she began buying up large amounts of the Just Mayo product, eventually spending almost $12,000 dollars under the assumption that this was all done for “quality control.”

Several Creekers started to suspect that they were being taken advantage of. One Creeker even remarked, “Why did I do things that made me really uncomfortable, that I knew weren’t right? I’m really struggling with those questions.” This concern continued as Creekers became confused as to what to do with their mountain of vegan mayo. Many gave the jars to hospitals, their friends, or just left them to rot in the streets.

But the Creekers were far from the only ones working for Hampton Creek who had grown suspicious of the company’s practices. Investor Ali Patrovi was hired by Hampton Creek as a Senior Executive in 2014 and quickly began to realize that Hampton Creek was misleading its investors. After digging into the company’s financials, Ali sent an email to Tetrick stating that he believed that the company was pitching false sales numbers (off by about $24 million) and that deceiving investors was a big mistake and one that could lead down a path that “is especially dangerous.” Ali even wrote that he and his brother “personally feel duped” by Hampton Creek, a realization that led him to resign nine days after joining the company.

However, the dubious behavior doesn’t stop there. Bloomberg’s report not only brought into question the popularity of the item, but the quality of the item as well. According to one of the six scientists-who was tasked with working on research and development for Hampton Creek—much of the research they did was “super, super basic” and consisted of throwing a bunch of plant extracts together to see if anything worked. He remarked that not only “was there no attempt to infer causality,” but that research was “not really science.” This pattern eventually led to four of the seven scientists (tasked in this area of research) to leave the company later in 2014.

Hampton Creek received funding from the Humane Society of the United States. When the proverbial little old ladies write those $19/month pledges, is this how they expected their money would be used?

It also calls into question the many claims HSUS makes when it comes to consumer demand of everything from cage-free eggs and meatless Monday. If HSUS was so closely involved with Hampton Creek, wouldn’t it seem likely they were aware of the buy back scam?