Homeland Security is on the Case (corrected) - HumaneWatch 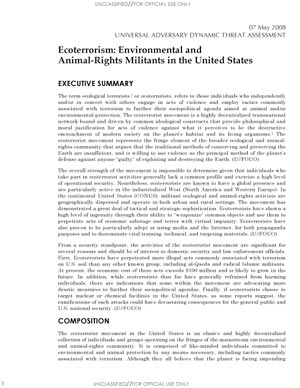 UPDATE (18-Feb-2010): HSUS's attorneys inform us that the report referenced below has been withdrawn and re-written by DHS, and no longer includes references to either HSUS or the Fund for Animals. Accordingly, this article has been supplemented to correct the record. A correction appears below.

We're not going to offer lots of editorial commentary about this. It is what it is.

In May 2008, the U.S. Department of Homeland Security issued a report titled "Ecoterrorism: Environmental and Animal-Rights Militants in the United States." The report carried the header "UNCLASSIFIED // FOR OFFICIAL USE ONLY."

On page 9, you'll find this conclusion:

In the interest of fairness, we should point out two things. First, this report was developed by Helios Global, a private contractor hired by DHS. But DHS issued it, so we're taking for granted that it has the government's official imprimatur. (We're told by friends in the Departments of Homeland Security and Justice that this sort of thing is commonplace.)

Secondly, HSUS has endorsed a "Statement Against Violence." But note that the report refers to "certain individuals within the HSUS," not the entire organization. We know who some of those individuals are, and I'll be sharing that information with you as this project moves forward.

CORRECTION: Today we learned from HSUS's attorneys that the following letter exists. It indicates that the report mentioned above has been withdrawn by the federal government. We regret not having known about this sooner.

So as the record stands, it's not the opinion of the U.S. government that HSUS and the Fund For Animals have eco-terror connections. But it appears to have been the opinion of Helios Global in 2008.