How Much Money is Chipotle Paying HSUS? - HumaneWatch 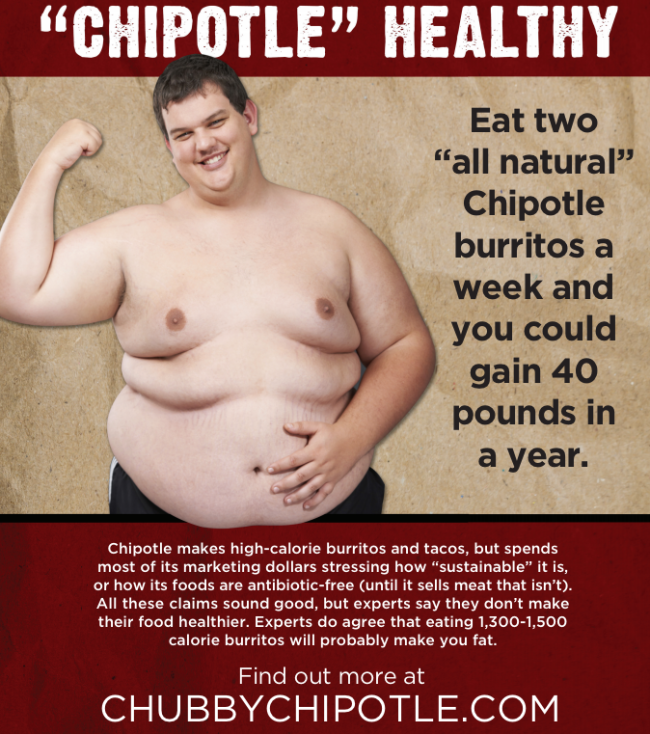 Chipotle Mexican Grill has become a billion-dollar corporation thanks in large part to ads portraying its burritos as all-natural and healthy. But a new campaign by our parent organization is exposing Chipotle’s bogus marketing as Big Burrito B.S. The campaign, found at www.ChubbyChipotle.com, draws attention to the false “health halo” created by Chipotle’s marketing, arguing that the real health concern is 1,500-calorie burritos high in calories and fat. Our parent, the Center for Consumer Freedom, has a history of exposing junk science and bogus marketing claims, so the campaign is our bread and butter. (Visit the website for details.) Don’t get us wrong, we think everyone has the right to eat a big, fattening burrito if they want to; however, Chipotle has tried extra hard to imply that its food is healthier than others’ even when it isn’t.

The campaign doesn’t touch the Humane Society of the United States, so we haven’t written about it here. Yet on Friday, HSUS disseminated a statement to the media attacking the campaign. Get that: A vegan group sticking up for a multinational corporation that profits from hawking burritos full of meat and dairy products.

It’s strange bedfellows and odd timing, to say the least. Our campaign had launched the previous week, and it took HSUS’s PR folks 8 days to fumble a press statement out the door. That’s an eternity in the news.

We suspect the delay was due to HSUS getting some sort of pay-to-play from Chipotle. It certainly wouldn’t be the first time Chipotle has supported HSUS efforts. Chipotle backed an HSUS ballot measure in 2010 in Ohio that could have crippled farmers. With HSUS pushing a ballot measure in Massachusetts to ban the sale of most eggs and pork products, perhaps we should expect to see Chipotle on the donor list.

Amusingly, HSUS CEO Wayne Pacelle wrote on his blog that the Chubby Chipotle campaign is “flaccid.” It’s an odd adjective to use, considering Chubby Chipotle was featured in media all over the country and, more generally, the blog was the umpteenth time Pacelle has complained about our work.

Perhaps “flaccid” has just been on Pacelle’s mind a lot lately. For one, it aptly describes HSUS’s fundraising since we launched HumaneWatch in 2010. And Pacelle has also recently seen blow after blow be delivered to his leadership. HSUS settled a racketeering lawsuit last year for millions of dollars, had a “donor advisory” issued against it by Charity Navigator, and is currently under investigation by the Oklahoma Attorney General, to name just a few things. If Pacelle can’t stop the HSUS ship from running aground, perhaps his new special advisor Bob Dole could open a few doors for a new line of work combatting flaccidity.

As for Chipotle, the group coming to company’s defense against accusations of misleading consumers is HSUS, which itself is under investigation in at least one state for misleading donors. Chipotle couldn’t have a more fitting companion.