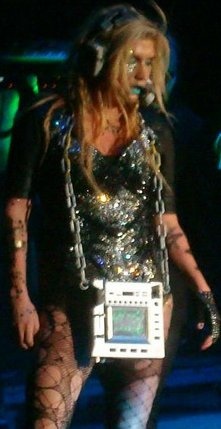 We reported earlier this week about the controversy around an auction for a hunt of a single, non-breeding black rhino that raised $350,000 for anti-poaching efforts. It’s interesting that the biggest complainer about this auction, the Humane Society of the United States, isn’t apparently spending much, if anything, toward rhino conservation itself, according to its tax returns.  If HSUS had its way, this $350,000 wouldn’t make its way to anti-poaching programs, simply because HSUS is ideologically against hunting.

And now, the latest setback in the fight against illegal poaching comes from HSUS’s own “global ambassador,” the music artist calling herself Ke$ha.

Celebrity gossip website Radar Online reports Ke$ha has committed a major animal-rights faux pas: She was caught by U.S. Department of Homeland Security last year trying to bring a $500 “snuff bottle” made of illegal ivory into the country.

Ivory trade is banned in many countries, including the U.S., due to the reduction in elephant populations and poaching. The ivory trade has also been linked to funding wars in Africa.

Will this flap cause a severance of ties between HSUS and Ke$ha? Don’t count on it. HSUS uses Ke$ha’s celebrity to enhance its brand, so it would lose by taking a principled approach. See HSUS’s relationship with Michael Vick. It’s similar to how a number of PETA celebrities have been caught in hypocrisy, such as wearing leather despite fronting PETA’s anti-fur campaigns or even serving meat.

Color us skeptical. (Would you buy a $500 accessory that was made of plastic?) Ivory seems like a selling point for a product, not something that would go unmentioned. But perhaps she was, in fact, caught unaware.

Regardless, the biggest crime here is how much more HSUS could be doing to stop poaching. HSUS has a $120 million dollar budget, yet our analysis of its tax returns finds that it gave very little in grants to sub-Saharan Africa in 2011 and 2012—and a minority of that appears to have gone towards elephants.

Meanwhile, HSUS spends up to 45% of its budget on overhead, according to CharityWatch. Animal People puts it higher, at 55%. That’s a lot of money going towards promotional materials, propaganda, and complaining about $350,000 that’s helping anti-poaching efforts in Namibia. Wouldn’t it be nice for HSUS to walk more walk and talk less talk?