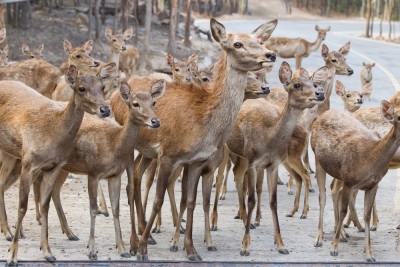 If there’s one thing the Humane Society of the United States seems opposed to, it’s common sense. But in light of events in Ann Arbor, Michigan, you might be able to add logic, scientific facts, and feeding the hungry.  But before we get there, here’s the backstory.

Struggling with an out of control deer population, the city of Ann Arbor approved a deer cull given that deer-vehicle collisions were up 75%, the deer were straining the ecosystem, and the near certain increase in ticks carrying Lyme disease. Despite these sensible grounds, activists were outraged that deer had been hunted in their city.

HSUS’s political ideology puts it at odds with biological and ecological experts.  According to wildlife expert Jim Sterba, PZP “for free-ranging whitetails, does not work. And it is neither practicable nor affordable.” That’s because PZP efficacy has only been proven on isolated populations , such as animals on islands or those living in a fenced environment. University of Michigan professor Christopher Dick, a biologist, had a blunter word for what HSUS is advocating: “Pseudoscience.”

To work anywhere else, you’d have to count, track, then shoot hundreds of deer with a dart, not once, but as long as the population is to be managed since the effects of PZP are not permanent. Plus, you’d also have to prevent any crossover from nearby herds—which takes us back to the whole only-works-on-islands aspect.

Logical contradictions and science denial aside, the other astounding thing is that activists held a “deer lives matter” rally in honor of the 63 killed in the cull. An inconvenient fact for HSUS and the activists, however, is the hunt was far from wasteful because the venison was donated to feed the homeless. In fact, if all 63 deer were used, it’d amount to about 10,080 servings of venison.

With that in mind we’d like to ask these self-congratulatory activists and HSUS—do hungry lives matter? Or do animal lives just matter more? We’d love an answer because the answers implied by your protests and lobbying seem inhumane.