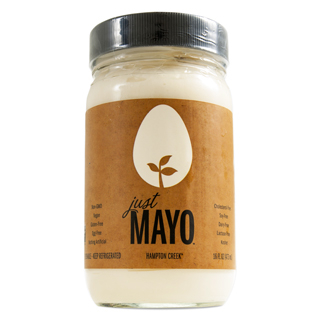 Hampton Creek Foods (HCF), a company co-founded by HSUS food policy director Josh Balk and his pal Josh Tetrick, is aimed at eliminating the egg industry. But it appears the company’s sales data is just as fake as its vegan mayo.

Like many socially driven companies, HCF brands itself as a healthier, greener, more ethical alternative to conventional food products. But if HSUS shows us anything, it’s that brands can be carefully crafted to hide a group’s bad side.

Yesterday, Bloomberg published a damning exposé on how Hampton Creek hired people to buy up its fake mayo because, apparently, normal shoppers wouldn’t:

“[T]he startup undertook a large-scale operation to buy back its own mayo, which made the product appear more popular than it really was. At least eight months before the funding round closed, Hampton Creek executives quietly launched a campaign to purchase mass quantities of Just Mayo from stores, according to five former workers and more than 250 receipts, expense reports, cash advances and e-mails reviewed by Bloomberg. In addition to buying up hundreds of jars of the product across the U.S., contractors were told to call store managers pretending they were customers and ask about Just Mayo. Strong demand for a product typically prompts retailers to order more and stock it in additional stores.”

It goes without saying, such actions seem strange for a company based on a so-called ethical philosophy.

“Two former senior staff who worked closely with Tetrick in 2014 and 2015 say the Hampton Creek CEO initiated the buyouts partly to make sales look better to potential investors. One says Tetrick didn’t disclose the practice to would-be backers during fundraising pitches in 2014. Fundraising pitch decks reviewed by Bloomberg do not reference the buyouts. ‘We always comply with our disclosure obligations to prospective investors,’ Tetrick says in an e-mail.”

Should we believe Tetrick? Why should anyone?

We reported on some serious disenchantment over at Hampton Creek last year coming from employees who were blowing the whistle on allegedly dishonest operations. One review on Glassdoor, an employer review site, reads:

“You will learn how to trick people and manipulate good-intentioned (sic) individuals. For example, you might create tons of fake reviews on a site like Glassdoor… or lie that you are a customer requesting products to be on the shelf.”

Another alleges employees are told to have a snake-oil mentality about the product:

“You are told what to say to customers who ask what’s so special about this, and dupe them into beliving it’s a healthier product… when in truth it’s just condiment with no animal products in it that tastes like mayonnaise.”

And one from just two days ago reads:

“[The CEO] spends the investor’s money on animal rights and political venues versus focusing on the company mission. CEO gives investment money to non-profits to further his cause for saving animals… There are many examples of the CEO manipulating the truth to gain traction with customers, investors, and employees.”

Like Hampton Creek, HSUS also misleads its donors/investors. Surveys of supporters show a majority think their money is going to local animal shelters when only 1% actually goes to help local shelter animals.

It shouldn’t be surprising that HSUS has invested donor money in the Hampton Creek scam. More money from well-meaning animal lovers gone to the dogs. Just not literally… unfortunately.