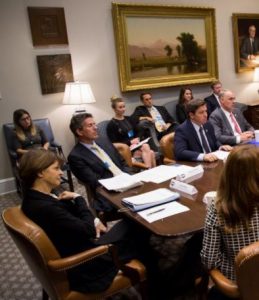 The Humane Society of the United States’ political arm endorsed Hillary Clinton last year, calling a Donald Trump administration a “threat to animals everywhere.” So why is HSUS CEO Wayne Pacelle now getting close to the very people he condemns?

And now Pacelle is hobnobbing with the Trump family while sitting just two chairs away from Zinke at the White House. HSUS also hosted Lara Trump at its Washington, D.C. office in July.

One possibility: Pacelle is looking for money. Pacelle, you may recall, betrayed many HSUS supporters by publicly allying with Michael Vick after Vick’s release from prison for dogfighting-related charges. HSUS took $50,000 from the Philadelphia Eagles and embarked on a public rehabilitation tour for Vick. Pacelle even endorsed Vick getting another dog as a pet.

Now, Pacelle sees a new opportunity: Get close to a billionaire’s family and its social network. Oily Pacelle loves to attend and host events for the wealthy in Palm Beach and Manhattan. And it’s clear from Vick that anyone’s money is green to Pacelle, who laid off 55 people last year after HSUS had fundraising troubles.

We have followers of all political stripes, so we’re neutral as to the politics here. But if Wayne Pacelle wants to play both sides—much like he tried to have it both ways with Michael Vick—people deserve to know.