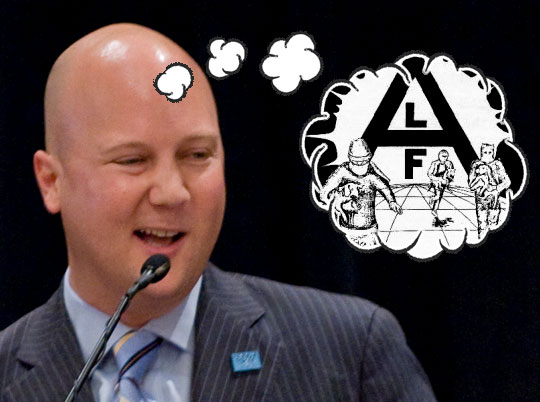 After credible allegations surfaced in national media in January that Pacelle had harassed women over a decade-plus period, the HSUS board of directors—shockingly—voted to keep him as CEO. The next day, facing donor blowback, Pacelle resigned. Meanwhile, he never apologized or admitted any wrongdoing, and the board didn’t apologize for its vote to keep the creep. In fact, one member, Erika Brunson, blew off the situation, telling the New York Times, “We didn’t hire [Pacelle] to be a choir boy.”

The following month, the Washington Post reported that one of Pacelle’s alleged victims was told by Mike Markarian, HSUS Chief Operating Officer and head of HSUS’s lobbying arm, that her job was to “protect” Wayne:

She wrote in a widely shared Facebook post that she received “calls and emails from donors — women Wayne had affairs with, and when he turned cold with them, called [me] crying and sent lengthy emails saying they felt ‘used.’ ”

She sent “the most disturbing one” to Pacelle and Mike Markarian, the Humane Society’s current chief operating officer.

By all public indications, nothing happened to Markarian after this allegation came to light. He continued on as COO as if nothing happened, and there was no public statement from the board addressing or acknowledging the seriousness of the charge.

Markarian is a longtime Pacelle pal, taking over the Fund for Animals, which Pacelle had been national director of, after Pacelle left to join HSUS back in 1994. (It was at FFA that Markarian penned an essay in defense of the FBI-designated terrorist group Animal Liberation Front.) Markarian and Pacelle stayed close, and Markarian joined HSUS following the merger of HSUS and FFA in 2004. He also served as head of the Humane Society Legislative Fund.

Now news has broken that Markarian is leaving HSUS at the end of August. But the spin is in. The official story from Markarian—which will no doubt be mimicked by the HSUS Politburo—is that he is moving to Italy and has had his eye on going into winemaking for some time.

We suspect there was some internal pressure on Markarian to leave. But the fact is allowing him to go out on his own terms with his own PR spin shows what the real tactic is at HSUS: To hope people have short memories, and to sweep any bad behavior under the rug.

Kind of like what Markarian is alleged to have done about Pacelle.

The new HSUS under Kitty Block is just like the old one. In the meantime, whoever writes the next textbook on ethical nonprofit leadership should be sure to include HSUS in the examples of what not to do.