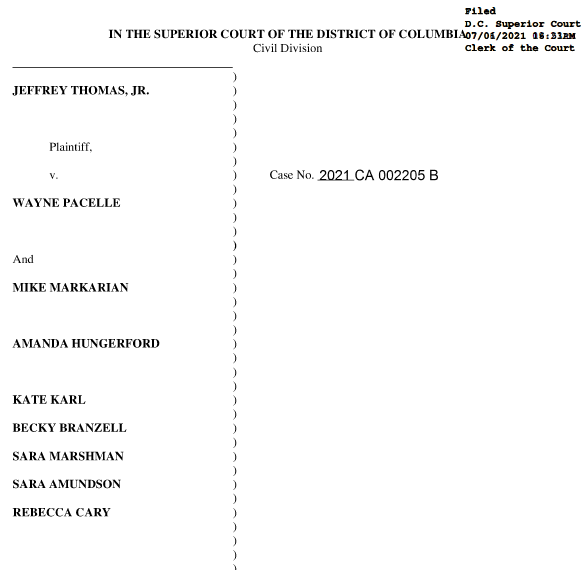 Current and former officials with the Humane Society of the United States are defendants in a new lawsuit tied to a sexual harassment scandal at the organization.

The lawsuit, which names former CEO Wayne Pacelle, former COO Mike Markarian, and HSUS General Counsel Kate Karl, among others, is the latest in a story we’ve been following over the past year.

The new lawsuit is filed by Jeffrey Thomas, a former employee of HSUS’s lobbying arm. Thomas previously filed a lawsuit against the former secretary of Pacelle, accusing her of making false accusations against him after he spurned her advances. He claims she got him fired in late 2017–just months before a sexual harassment scandal involving Pacelle burst into public view, leading to Pacelle’s resignation.

The new lawsuit stems from information obtained by Thomas through discovery and depositions over approximately the past year in this first lawsuit, which is still ongoing.

The new lawsuit alleges defamation, retaliation, and breach of contract, among other torts. It seeks $10 million.

“CEO Pacelle used the Humane Society”–which is unaffiliated with local humane societies–“to recruit and groom sexual prospects and victims, retaliate against whistleblowers, and air sad commercials about animal abuse to fundraise for charitable dollars to ‘help animals’ that were used to pay settlements to his victims through the HSUS Office of General Counsel,” the suit alleges.

The lawsuit puts HSUS and its leadership in a tough spot.

HSUS itself isn’t named as a defendant in either action–only individual employees and former employees are. The current leadership of HSUS is left in a position of potentially having to go to bat for the sleazy former CEO.

The current HSUS CEO, Kitty Block, may not be on the best of terms with Pacelle. Block took a public shot at Pacelle last year, writing, “as far as we know, Pacelle has not atoned at all. Society gets into trouble when we welcome individuals back into the fold when they have not owned up to their misdeeds or otherwise attempted to address the harm they caused.”

Block was also involved in litigation against her superior for sexual harassment in the 90s when she was a junior employee at HSUS. That HSUS executive, David Wills, was recently sentenced to life in prison for child sex trafficking.

The lawsuit was filed in July in D.C. Superior Court. Read the full lawsuit here.