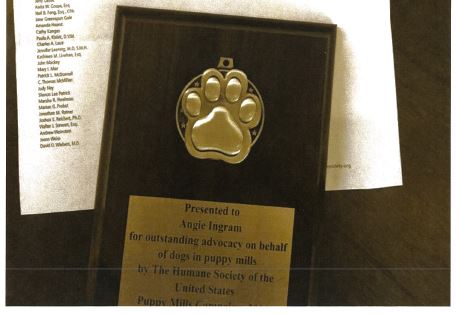 A recent Washington Post exposé uncovered how some animal rescues are spending millions to quietly buy dogs at auction from commercial breeders they would otherwise publicly scorn as “puppy mills.” The Humane Society of the United States responded to the story not with condemnation, but with trying to change the conversation. One reason might be that HSUS gave an award to a rescuer tied up in this mess.

Angie Ingram, a lawyer who works with Cavalier Rescue of Alabama, was one of the rescuers buying dogs in this strange situation, according to the Post:

Documents show that Ingram paid $24,200 to buy the two Cavaliers for which Yoder had paid $8,305, with all the totals including the auction’s fees; the check was one of four that Ingram wrote that day, totaling $218,325 for 54 dogs, according to documents submitted by lawyers for Ingram and others in an Alabama libel lawsuit filed in the wake of the auction.  […]

Documents show that bidders now affiliated with the nonprofit Cavalier Rescue of Alabama, where Ingram is listed as animal welfare program director, have paid $406,872 buying 172 dogs and puppies at auction since 2014 — an average price of $2,365 per dog.

The rescue claimed in response to the story that it loses money on the dogs. However, its tax returns for 2015 and 2016 shows that its revenues exceeded expenses for both years.

And while this was going on, Ingram won an award from HSUS in 2016. The award came from John Goodwin, head of the HSUS “puppy mills” campaign. You may remember him as a former spokesperson for the Animal Liberation Front, an FBI-designated domestic animal-rights terrorist group.

HSUS praised Ingram as someone who is “making a difference in their communities to help stop puppy mills.” Yet far from shutting “puppy mills,” by buying from breeders she is keeping them in business.

Which, mind you, isn’t a bad thing in most instances. Literally, if no dogs breed, then you won’t have any more dogs. Breeding has to be done somewhere; the public (including us) is generally only against inhumane breeders or bad actors.

Here’s our theory on what’s really going on: Americans want purebred dogs. And rescues see an opportunity to raise lots of money on the prospect of “rescuing” purebred dogs. So the business model has moved from consumers buying from a pet store (which has been heavily stigmatized) to consumers “adopting” from a rescue—which is, as evidenced by the Post story, can be a buying-and-selling enterprise.

It’d be nice if people dropped the charade that all breeders are bad. If the Post story shows anything, it’s that even some rescuers think breeders are fine to do business with.