HSUS Is Against All Animal Farmers—Big and Small - HumaneWatch

HSUS Is Against All Animal Farmers—Big and Small

The Humane Society of the United States has a revamped campaign pretending that it is an advocate for small farmers. This is nothing more than the “divide and conquer” strategy that dates back to Roman times.

HSUS is a vegan organization that has a PETA-like agenda. And just like PETA, it does not support any agriculture that uses animals. Consider these facts: 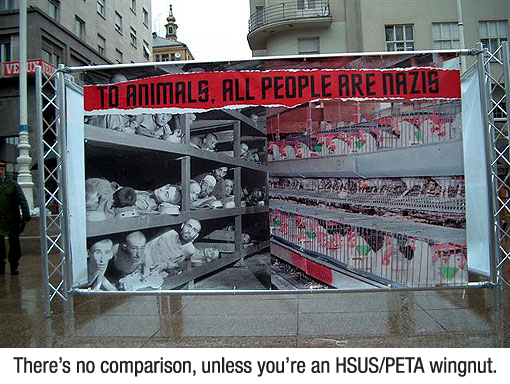 Fact: HSUS’s past farm-animal vice president Miyun Park told an animal rights conference, “We don’t want any of these animals to be raised and killed [for food]….And so because of that, a number of organizations including the Humane Society of the United States, we work on promoting veganism.”

Fact: After Wayne Pacelle, a strict vegan, became president of HSUS, he declared a new food policy making all HSUS events vegan—no meat or dairy or eggs, no matter how they are produced.

Fact: Wayne Pacelle has written that eating meat is “speciesist”—meaning animals are discriminated against, similar to racism or sexism.

Fact: HSUS has been secretly investing money in start-ups such as “Beyond Meat” and “Beyond Eggs”—businesses that hope to replace meat and egg products entirely.

Fact: Wayne Pacelle has said that PETA has “visionary and professional leadership. There’s no doubt they’re creative and courageous.” He also said, “PETA has really done so much in a short time to…promote animal rights.”

Fact: John “J.P.” Goodwin, an HSUS director of animal cruelty, has said, “My goal is the abolition of all animal agriculture.” Goodwin is a former spokesperson for the terrorist Animal Liberation Front.

The bottom line: HSUS is run by strict vegans who are only using smaller, organic farmers as a prop. These vegans are smart enough to know that 99% of the public eats animal products. So they provide lip service to small farmers for political and public-relations reasons to cloak their agenda.