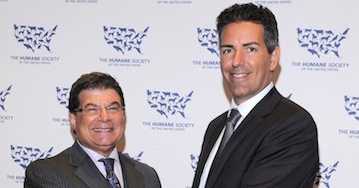 We’ve written before about Arthur E. Benjamin, a man who has helped raise $2.5 million for the Humane Society of the United States, who sat on HSUS’s National Council for four years until last year, and who apparently enjoys hobnobbing at HSUS’s glitzy galas. ATI, a for-profit education company that Benjamin founded, had been in hot water, agreeing to pay $3.7 million and later filing for bankruptcy after it was sued by the U.S. Department of Justice for allegedly defrauding the government of millions of dollars in education grants. (The company did not admit wrongdoing.) ATI’s then interim CEO told the press that “all of the alleged misconduct at ATI happened under the leadership of Arthur Benjamin.”

It turns out that Benjamin’s company isn’t the only one that’s been the subject of litigation. Benjamin himself has been sued for sexual assault, rape, and harassment on at least four occasions. The complaints themselves allege a pattern of inappropriate or unlawful behavior by Benjamin toward women spanning approximately 20 years. The claims largely concern Benjamin’s alleged actions while CEO of a company called DataMark.

Benjamin denied these allegations, and the cases were largely settled without going to a jury.

The Meron and Stoll claims were settled out of court. The Juarez case was allegedly settled on the eve of the trial. The Borthick state case went to trial, where a jury found Benjamin liable for negligent infliction of emotional distress, but not the other claims. Benjamin later reached a settlement with Borthick. (Benjamin sued his insurance company to get indemnification.)

Benjamin left DataMark not long after the lawsuits, in 2005, and became CEO of ATI, the company later sued by the U.S. Government for fraud, and continued in that position until 2011. That year, Benjamin joined the Humane Society of the United States’ National Council and seems to have been a regular at HSUS’s ritzy New York City gala that draws high society. Benjamin has been on the leadership committee of HSUS galas, and Benjamin’s groups have also contributed $235,000 to HSUS.

Benjamin describes himself as a “philanthropist” with “a heart bigger than his body,” and his self-aggrandizing website features quotes from Voltaire and Gandhi. It seems Benjamin thinks quite highly of himself.

But if there’s veracity to these claims—and since they’re settled, we’ll probably never know—then perhaps the Humane Society of the United States is a great place for Benjamin to boost his image. After all, HSUS rehabilitated the public image of convicted dogfighting kingpin Michael Vick (receiving $50,000 from Vick’s employer). HSUS president Wayne Pacelle even said that Vick “would do a good job as a pet owner.” And Pacelle says of Benjamin, whose groups have given hundreds of thousands to HSUS, “Arthur Benjamin is the sort of person who emerges on the scene, and has an electric effect on an organization and its donors.”