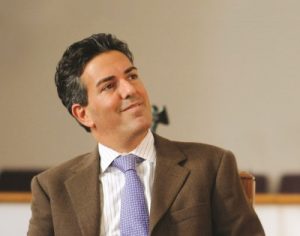 Wayne Pacelle (L), President and CEO of the Humane Society of the U.S., sits with Philadelphia Eagles quarterback Michael Vick, who joined the NFL team this year after serving time in federal prison on a dog-fighting conviction, during a talk with young people about ending dog fights, at Covenant Baptist Church in Washington September 29, 2009. REUTERS/Jonathan Ernst (UNITED STATES SPORT FOOTBALL ANIMALS)