HSUS Slums it with Ex-Cons - HumaneWatch 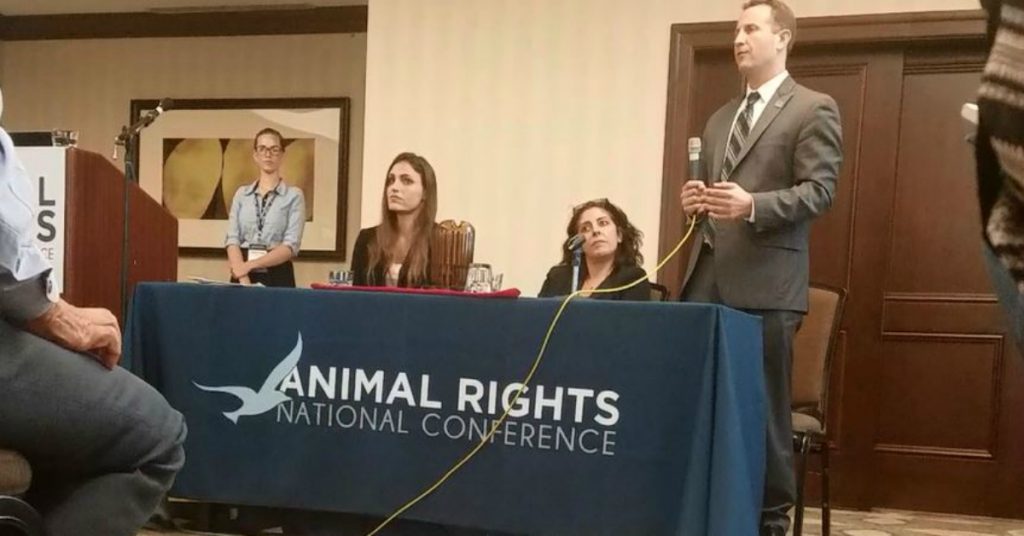 While the Humane Society of the United States claims to be a mainstream organization to the public-at-large, its continued participation in the annual Animal Rights National Conference shows its true intentions and motivations—and allies.

HSUS sent a delegation to the conference yet again this year to join with PETA, The Humane League, Mercy for Animals and dozens of other radical animal rights organizations to talk with activists about various ways to end animal agriculture and meat consumption. Notable criminals Peter Young, who was sentenced to two years in federal prison for releasing mink and foxes, and Lauren Gazzola a member of the SHAC 7 who also did time in the federal slammer, were in attendance, as was Jerry Vlasak, who has previously talked at length about the benefits of assassinating animal researchers. All three were honored with speaker and moderator slots at the conference.

Courtesy of the Animal Ag Alliance, who like us suffered through the conference so others wouldn’t have to, here are a few notable quotes from the weekend.

The face of the Nonhuman Rights Project, Wise has been working to gain legal personhood for animals for years. PETA has recently been pushing the same arguments for Naruto, the selfie taking Indonesian monkey.

“Breaking the law can often be a good thing to do.”
– Zach Groff, “Independent Researcher,” when responding to a question about amplifying the movement

Groff made this list last year by talking about disrupting events like hot dog eating contests. He’s escalated this year to the outright advocacy of criminal activity.

“We need to burst the animal superiority bubble.”
– Ingrid Newkirk, Co-founder and President of PETA

During her speech, she also seemingly included ants as animals.

Coman-Hidy told the audience that animal welfare is not the end-game, but that the Humane League is changing the treatment of animals.

“We have to find a way to get people to eat less meat.”
– Kristie Middleton, Managing Director at HSUS

The author of a book seemingly no one has read, Middleton’s job at HSUS is to get institutions and organizations to implement vegetarian and vegan policies.

“We need to shift our language to include small-scale operations that are supposed to be better.”
– Hope Bohanec, United Poultry Concerns

After years of pushing the factory farming narrative, activists like Bohanec are moving to the next phase of the public smear campaign of farms: small, family-owned operations.

“We’re never going away.”
– Krista Hiddema, Mercy for Animals (Canada), in response to a question about humane policies not being as good as complete liberation.

Hiddema says what we’ve always known: giving in to demands from the radical animal rights activists only encourages future action.

Their goal is clear as their methods are opaque: End the use of animals as food, entertainment, and pets – by any means necessary.

Typically, in other movements, people like this would be considered on the fringe. But with animal rights, they’re front and center. Instead of disavowing these tactics and committing to ethical advocacy, HSUS sends representatives to these gatherings to tacitly endorse the ideas and tactics of rabid activists and organizations.