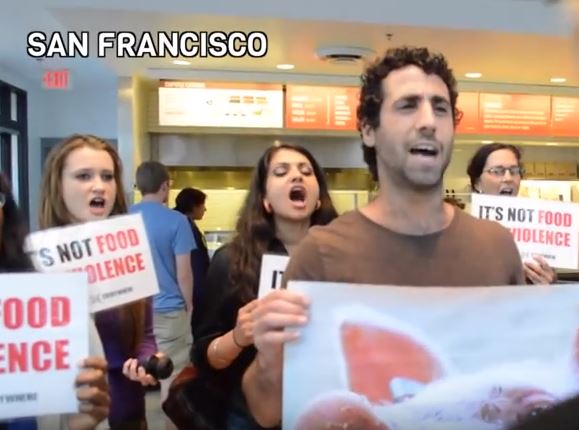 The Humane Society of the United States is not the cute, fuzzy group it sounds like based on its name and its ads. It is a group run by animal-liberation radicals from PETA and other groups who simply market themselves as moderates in order to raise cash—money that they use to fund their campaigns. HSUS leaders have defended the Animal Liberation Front (an FBI-designated terrorist group) and praised PETA, among other things.

So perhaps it’s no surprise that last week HSUS vice president Josh Balk had dinner with Wayne Hsiung, leader of the extremist group Direct Action Everywhere (DxE). The phrase “direct action,” according to the FBI, is “criminal activity designed to cause economic loss or to destroy property or operations.”

DxE has openly admitted to breaking into farms and stealing animals. The FBI is reportedly investigating following a DxE theft of piglets at a Utah farm. Under the federal Animal Enterprise Terrorism Act, passed in 2006, it is a crime  if someone “intentionally damages or causes the loss of any real or personal property (including animals or records) used by an animal enterprise … for the purpose of damaging or interfering with” its operations.

By its own admission, DxE appears to fit the legal bill of animal-rights terrorism. (DxE, of course, spins law-breaking as “open rescues” that are morally acceptable vigilante actions against “the system.”)

DxE is also known for its publicity stunts such as harassing restaurant guests eating a meal or haranguing people at the supermarket. DxE goes after animal protein suppliers that are considered by some to be more humane, such as Whole Foods suppliers, because the group is against all meat, cheese, and eggs no matter how the animals are raised. DxE has the proposed goal of banning meat in Berkeley, CA, by 2025—and eventually everywhere. Essentially, they have the same agenda as PETA, except with more aggression and less killing of pets.

Why is an HSUS executive hanging out with this guy? Use Occam’s Razor. HSUS and Direct Action Everywhere have similar goals to stop Americans from enjoying meat, even if the means are different. HSUS needs to raise $100 million a year, so it’s not likely going to steal animals from farms and risk a federal investigation. But it seems to be another example of how HSUS leadership is quite cozy with the more radical members of the animal rights movement.