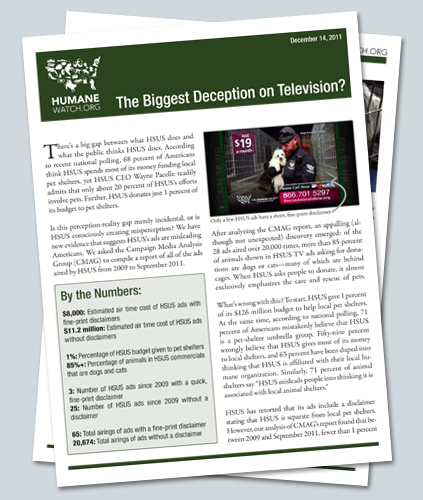 A few weeks back we released a detailed report regarding the Humane Society of the United States’ deceptive television advertisements. By analyzing data compiled by the Campaign Media Analysis Group (CMAG) from 2009 through September 2011, we learned that more than 85 percent of animals shown in HSUS TV ads—which aired more than 20,000 times—asking for donations are either dogs or cats.

HSUS’s deception is clear, especially considering that it only gives 1 percent of its $126 million budget to help local pet shelters and that it doesn’t run any pet shelters of its own. It’s easy to see why 71 percent of Americans mistakenly believe that HSUS is a pet-shelter umbrella group, according to a recent national poll. Similarly, 71 percent of animal shelters agree that “HSUS misleads people into thinking it is associated with local animal shelters.”

You’d think that HSUS’s ad guys would knock off this nonsense. In fact, HSUS’s Emerging Media Manager claimed last week that “there is a disclaimer on the most recent commercial, which says the HSUS is not affiliated with local shelters.”

We asked CMAG to compile a report of the ads aired by HSUS from January 1-8, 2012. And again we found that less than 1 percent of HSUS’s TV appeals include any such disclaimer.

The Humane Society of the United States continues to air deceptive ads without disclaimers that mislead and exploit pet-loving Americans, yet HSUS tries to falsely assure people that it isn’t doing what it, in fact, is doing. You’ve got to admire HSUS’s gall. The only problem is that it continues to come at the expense of the nation’s pet shelters and, of course, needy dogs and cats.

Here’s how you can help: Contact the Federal Trade Commission and file a complaint about HSUS's misleading fundraising. You can do this in just a few, quick steps:

1. Go to the FTC’s Complaint Assistant and fill out your personal information.

3. When you offer details about your complaint, if you’ve given money to HSUS and believe that you were deceived by its ads, be sure to say so.