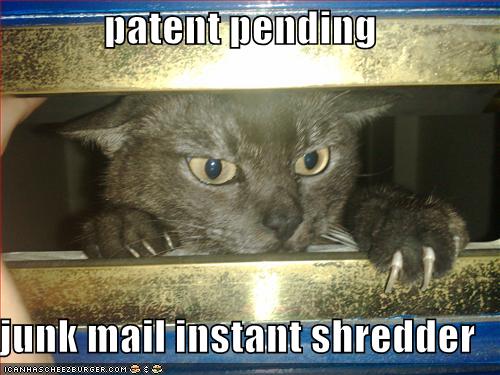 The official slogan of the Humane Society of the United States is "Celebrating Animals | Confronting Cruelty."

Maybe it should be "Celebrating Junk Mail | Confronting Checkbooks."

As anyone who has ever been on one of its mailing lists can tell you, HSUS is America's undisputed king of unsolicited tchochkes, geegaws, doo-dads, gizmos, calendars, magnets, tote bags, and other assorted junk. (Those of you who have experienced this first-hand, feel free to chime in.)

This assorted debris will show up in your mailbox if you're a member, if you haven't chipped in yet this year, and even if you've never contributed. And from first-hand experience we can attest that once they get their hooks in you, it can take 12 weeks or longer to be purged from their mailing lists.

Perhaps HSUS's direct-mail fundraising strategy is to make you feel guilty enough about getting something for free that you actually want to pay for it. Or maybe it's just trying to put its brand name in as many landfills as possible. We don't know. But a HumaneWatcher from Ohio sent us some interesting HSUS-branded merchandise last week, so it's worth taking a good look.

The note she included with these goodies read: "These folks sure have $$ to burn!"

You be the judge.

Here's Exhibit A: An HSUS screen-printed "cooler bag" (read: flimsy insulated six-pack bag), sent in a white plastic mailing pouch along with a two-page letter, a reply envelope, and a fundraising request. (We Photoshopped out the name and address of the recipient.) 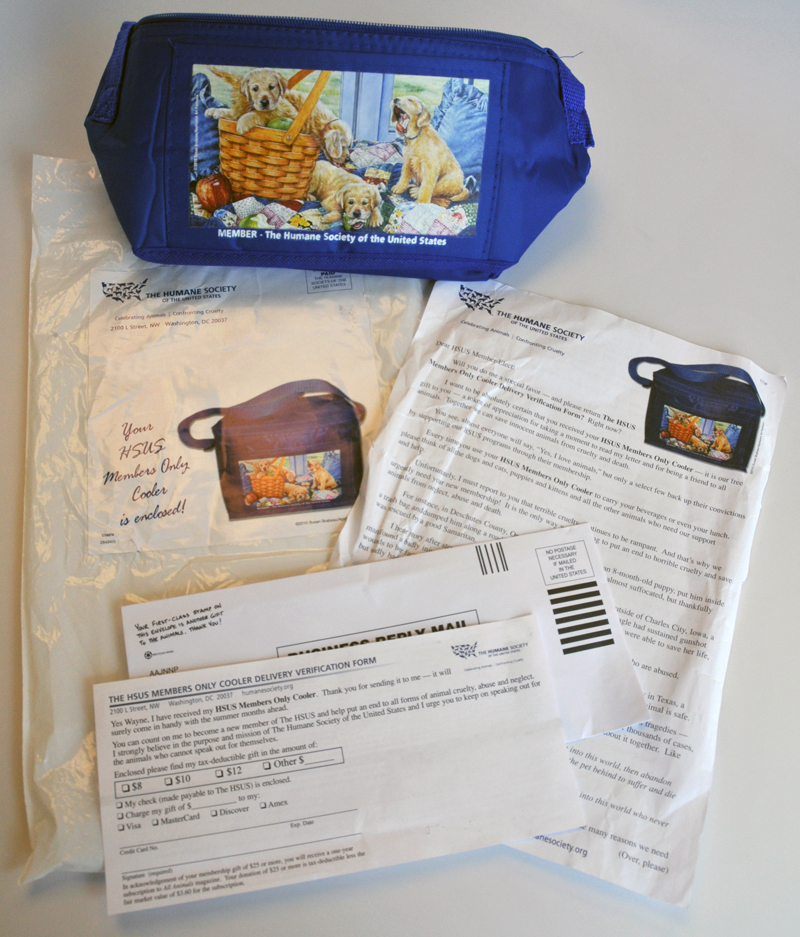 The cooler bag is made from either polypropylene or vinyl, but either way it's a petroleum product. (So is faux fur, by the way, but that's for another day.) It looks very similar to this item from a promotional-product manufacturer.

We called the maker and asked for his best bottom-line price for a quantity of 100,000 of these, printed with a full 4-color design. They told us the best price available would be about $1.25 apiece. And yes, they're made in China. We also called a "fulfillment house," one of those places that will print mail-merge letters and ship anything to anyone, provided you give them a list. We got prices from them too.

Our estimate of the cost of this mailing for HSUS would include $1.25 for the cooler; 32¢ for printing the letter, fundraising insert, and reply envelope; 7¢ for the white plastic mailing pouch; 10¢ more for printing and applying the color label on the outside of the pouch; 32.8¢ for nonprofit bulk-rate postage (based on a 3.3-ounce mailing); and 25¢ for the fulfillment house's "processing."

That comes out to $2.32 for every one of these that went out the door. I'm willing to grant that HSUS might get a package deal that makes it about $2.00 apiece, but that's still pretty ridiculous. And the check-off boxes ask for amounts between $8 and $12. (I'm sure these numbers vary widely based on which list you're on and how much money HSUS's bean-counters think you earn.)

Here's Exhibit B: An HSUS screen-printed tote bag (again, made in China from some sort of plastic), sent in another plastic mailing sack along with a reply envelope and a fundraising request. 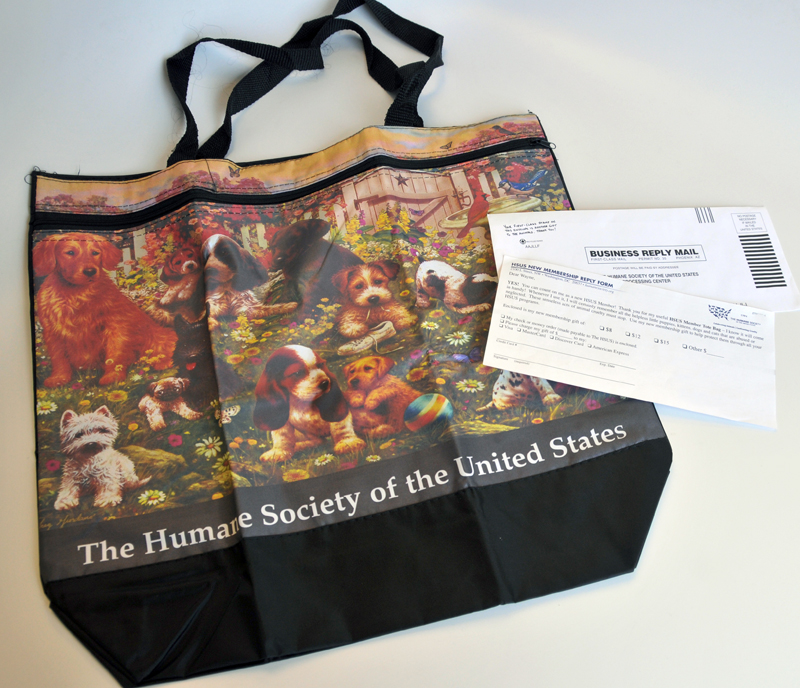 We don't care how much this one cost. The printing is blurry, and the last thing anyone in this country needs is another tote bag.

Perhaps the most bothersome thing about all of this junk mail is that the messages were all focused on dogs and cats. Look again at the six-pack beer cooler and the tote bag. Do you see any cows, pigs, or chickens? We don't either.

In fact, the fundraising request that arrived with the tote bag specifically refers to "all the helpless little puppies, kittens, dogs and cats that are abused or neglected."

We wonder what would happen if HSUS sent out tote bags with a freeze-frame from one of their undercover farming videos? Or if the beer coolers arrived with a slogan like "Michael Vick Is Awesome." Or "Pretending to Care Since 1954." Or how about "Let's Ban Hunting, Just Because We Can"? I think you get the idea.

For now, it looks like we (and our landfills) are stuck with gobs of non-biodegradable stuff from HSUS, most of it perpetuating the myth that it's a big, happy pet shelter group.

We think we need a new word to describe all the unsolicited stuff that HSUS mails out year-round. How about H-S-U-Trash? Wayne-waste? Too bad "kitty litter" is already taken.