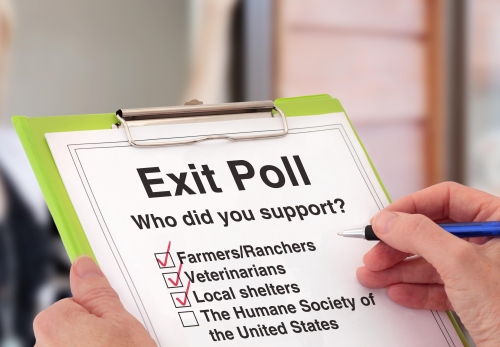 While the winners of a few races from yesterday are still unclear at this point, one thing is clear: the Humane Society of the United States lost big. Let’s review.

HSUS’s lobbying arm, the Humane Society Legislative Fund, made incumbent Iowa Rep. Steve King (R) its major target. According to FEC filings, HSLF spent more than $750,000 to oppose King, insinuating he was a dogfighting supporter. (King said he wasn’t but opposed a federal bill on states’ rights grounds–plus, dog fighting is already illegal on the state level.) That’s a hefty pile of money. At one point, HSLF had earmarked more than half its political spending on opposing King.

HSUS piled on, too, with CEO Wayne Pacelle launching scurrilous attacks against King’s character, apparently in retaliation for the Congressman pushing pro-farmer legislation that would undo HSUS gains in increasing the cost of eggs and other food products from animals.

The result? Steve King won re-election handily, and HSUS’s lobbying arm added to the egg on its face with a complete whiff.

What about ballot initiatives? Historically, HSUS has had success in single-issue demagoguery. Not this time.

In North Dakota, HSUS went in heavy behind Measure 5, a ballot initiative to make certain forms of animal cruelty a felony. HSUS and HSLF poured in more than $675,000 to support the measure, which dwarfed the contributions to the opposition campaign. The measure was essentially marketed as “lighting kittens on fire should be a felony.” You’d think a campaign like this would be as easy as a 1-foot putt.

Instead, the farming and ranching community in North Dakota didn’t like HSUS’s involvement—it knows all about HSUS’s anti-farmer agenda—and was joined by a number of local veterinarians and animal welfare advocates. They also questioned the wording of the initiative and proposed a legislative solution for next session that will pass similar laws (without HSUS at the table). And they won—by a whopping margin of 65 percent to 35 percent. Further, a pro-farming constitutional amendment passed in North Dakota by a similar two-to-one margin, dealing another blow to any future HSUS designs for the state.

We have to imagine Measure 5 would have passed if HSUS had simply not gotten involved, which leads us to conclude: HSUS’s name in North Dakota is as good as mud. Maybe if HSUS spent the six figures of donor money on saving animals—as its deceptive ads imply—as opposed to blowing it on politics in a state where it apparently has little credibility, something positive could get accomplished. Color us skeptical that HSUS will change its bad practices, though.

And let’s not forget the ballot measures that never came to be. HSUS dropped its planned initiative in Oregon to attack egg farmers after the main national egg trade group agreed last year to pursue federal “compromise” legislation—which has gone nowhere. And HSUS strangely abandoned its “Your Vote Counts” Missouri initiative this spring, possibly fearing another bit of bipartisan blowback in the Show Me State, after it had pumped several hundred thousand dollars into the campaign—again, money that donors likely thought was being used to help animals, not fund a political campaign to tweak legislative vote requirements.

We also noticed that the Humane USA Political Action Committee has now apparently folded. Humane USA, whose board included HSUS board members and staff, apparently filed a termination report with the FEC in October. Humane USA PAC’s website now redirects to a donation page for HSLF.

On a final note, HSUS state director Sarah Speed lost her bid for Pennsylvania state house. She wasn’t running on an animal rights platform, but obviously she would have been an open door for HSUS in the legislature.

In all, HSUS and its legislative arm spent bundles of money and came up empty. And for homeless animals in need, it’s a lost opportunity.