HSUS Dithers in the Gulf - HumaneWatch 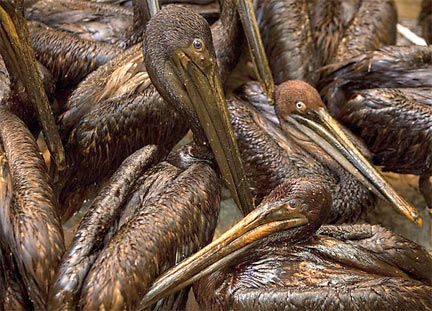 Humane Society of the United States CEO Wayne Pacelle was in Louisiana yesterday to hold a press conference. He told reporters that not enough is being done to help oil-covered wildlife in the Gulf of Mexico:

Pacelle, at a news conference in Belle Chasse on Monday, said there needs to be hundreds more people going to the oil-affected areas seeking oiled creatures.

He said those working on it are doing their best but the effort is not “pro-active.”

He said “trained workers need to be identifying and getting the oiled animals and birds so it isn't left to chance.”

Absolutely. There should be far more people wading into the ocean to rescue pelicans, egrets, terns, sea turtles, and whatever else is out there. And HSUS should be writing massive checks to fund the work.

Isn’t that the sort of a thing you’d expect a national “humane society” to spend its $192 million nest egg on? It’s hard to imagine a more suitable purpose than helping to clean up a major shoreline so that tens of thousands of animals don’t die needlessly.

In other words, it’s time to tap into the rainy-day fund. Because it’s raining like hell.

As far as we can tell, here’s a list of all the things HSUS has actually done in response to the greatest environmental disaster in America’s history, which began on April 20:

Starting to get the picture? Lots of preparing, and not much actual doing. Here’s more:

In case you missed the key message, HSUS is tanned, rested, and ready. But no one in charge seems interested in putting these showboaters to work. And if HSUS can’t reap publicity from being the lead dog, they just don’t want to hunt. Accordingly, they’re simply not doing much. Consider that last week, when the Better Business Bureau issued a lineup of charities engaged in gulf cleanup efforts, HSUS didn’t even make the list.

Add it all up: HSUS has paid for seven part-time consulting contracts, about $1,700 worth of dog food, a truck rental to drop it off, a few hours of a blog writer’s time, a short-term van rental, and a couple of video cameras. Not exactly breaking the bank, are they? It looks like a lot of talk and not much forward motion.

But every time one of those online articles reinforces just how prepared, ready, and hopeful HSUS is, a “donate now” message appears on the right side of the screen. Amazing, isn’t it?

Here’s a list of what HSUS should be doing instead if it’s really interested in helping out:

This isn’t rocket science. And I’m sure there are other things HSUS’s money could be covering right now that would actually help animals. But instead, what we’ve seen is a lot of posturing, posing, and preening. Is a little bit of action too much to hope for?