HSUS Fights for the Right to Carpet-bag - HumaneWatch 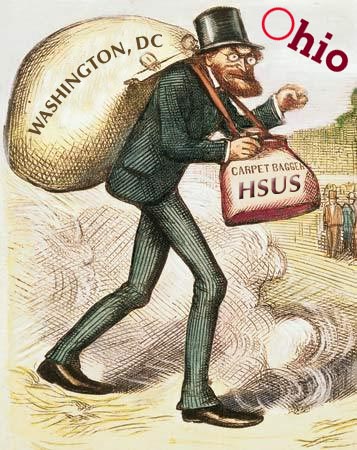 Imagine that you're running a group called Ohioans for Humane Farms. You're (not-so-secretly) controlled by the Humane Society of the United States. And your goal in life is to get a question on the November ballot that would invalidate last year's election, when Ohioans vested control of animal agriculture standards in a thirteen-person board that just started meeting a few days ago.

Now imagine that your volunteer efforts to gather 402,275 signatures of Ohioans by June 29 are way behind schedule. You started canvassing back on March 10, which means that almost half of your signature-gathering time has already passed. It's April 27, and you've collected barely 115,000 signatures. And you'll probably need 600,000 to reach your goal, since so many of yours will read "Wilbur," "Mickey Mouse," and "Kermit the Frog."

What do you do?

If you're following the typical HSUS playbook, you hire professional signature gatherers. That's how the animal rights group got California's "Proposition 2" over the top. (So much for those boasts of having “11 million constituents.” Hardly any of them show up when it counts.) And the activist who ran signature-gathering for HSUS in the San Francisco Bay Area in 2008 conveniently moved to Cleveland just a few days ago.

In Ohio, this could be a big problem. State law prohibits people who are not "residents of this state" from circulating petitions for signatures.

But HSUS's full-time staff includes more full-time attorneys than a Law & Order marathon. So why are we not surprised that the group is trying to sue the state of Ohio into submission?

That’s right—HSUS filed a lawsuit last week in Federal District Court (in the Southern District of Ohio) to have this "no carpetbaggers" law declared unconstitutional.

Laws, schmaws. There's an app for that.

We're not lawyers, and our organization certainly doesn't fleece its donors for 30 attorneys' salaries, so we wouldn't want to predict whether or not HSUS has a drumstick to stand on. But it's certainly clear that the well-heeled PETA clone is pulling out all the stops.

You can read the lawsuit for yourself, but here's what we thought was the most telling line:

Plaintiff HSUS has filed a Form 15 with the Ohio Secretary of State, stating that it will provide compensation to an individual or entity for supervising, managing, or otherwise organizing an effort to obtain signatures on a statewide initiative petition

In other words, HSUS is opening up its wad of cash to buy its way onto the ballot in November. And since actual Ohioans already voted to embrace someone else's vision of animal agriculture just seven months ago, the group will need to truck in Nevadans, Californians, and Michiganders to get it done.

It was just last week that one Ohioans for Humane Farms “volunteer” bragged that she was “one of the many Ohioans across the state” collecting signatures. So much for that. And so much for the latest pile of cash that will be diverted from pet shelters to HSUS’s legal dream team.

It's worth noting that in Missouri, HSUS’s front group has already submitted enough signatures to qualify its anti-“puppy mill” petition for the November election. Could it be that voters understand the difference between dogies and doggies, and are just fine with petting one and slow-roasting the other?