HSUS Goes Out of (the Dog Food) Business? - HumaneWatch 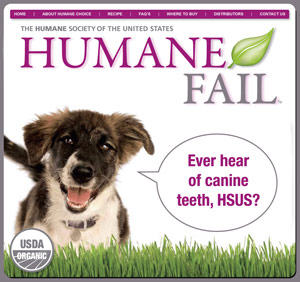 Remember “Humane Choice” dog food, a brand that HSUS launched in early 2010? The vegetarian kibble made in Uruguay and imported thousands of miles into the US that HSUS laughably dubbed “ethically responsible”? With the odd headshot of CEO Wayne Pacelle on the bag?

Yeah, that stuff. It looks like the so-called “Humane Choice” has been voted off the island. We can’t find it for sale anywhere.

That’s probably for the better. We were skeptical of it, as were a host of others including HSUS fans on Facebook. Even a former HSUS vice president panned the idea of vegetarian diets for dogs, saying that dogs do best with a diet that includes (gasp!) animal protein. As a veterinarian with NYC Veterinary Specialists put it: “Dogs and cats, they’re carnivores and they do eat meat as part of their natural diet.” Another veterinarian stated, “Dogs need meat in their diet.”

HSUS promotes vegan diets for people, so we assumed that this was an attempt to extend its human ideology to pets. But as pet expert Tracie Hotchner told CNN, we should “respect each species for what it was meant to be.”