News flash: As long as you hunt with bullets that aren’t made from lead, the Humane Society of the United States is A-Okay with it.

But that’s what the group is suggesting by trying to “get the lead out” of ammunition.

HSUS’s official position on hunting is that it “works to end the worst abuses in hunting and maintain longstanding protections for animals where they already exist.” Gee, to read that you’d almost think that the group is fine with about 99 percent of America’s sportsmen and women.

Forget that HSUS CEO Wayne Pacelle led the anti-hunting Fund for Animals for six years, or that HSUS merged with that group in 2005. And set aside Pacelle’s well-documented early warning that “If we could shut down all sport hunting in a moment, we would.”

Nope—we’re supposed to believe that HSUS is a moderate, common-sense group whose only real objective during deer season is to make sure the animals can run free and die cleanly.

Sure. And the Pope is secretly a Mormon.

The topic was a rather arcane issue related to polar bears in the Canadian arctic circle. But at one point, Congressman Don Young (R-Alaska) asked Markarian about HSUS’s position on hunting in general (click here for the hearing video, and scroll to 42:50). Here's the relevant portion: 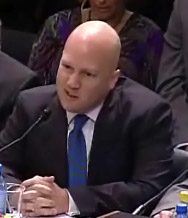 Markarian: "Congressman, I think you know our position. Uh…"

Markarian: "We do not support the hunting of polar bears in the arctic."

Young: "Do you support any hunting?"

Markarian: "We're not against all hunting. We're against inhumane…"

Young: "Which hunting do you support?"

Markarian: "We're not against …"

Young: "Which hunting do you support?"

Markarian: "We're not against subsistence hunting in your state of Alaska, we have no problem with [it]."

So apparently, other than “subsistence hunting in Alaska,” all hunting is "inhumane." That's handy to know.

HSUS’s stated rationale for its position is that birds (including the California condor) can eat lead shot that falls to the ground, and are subsequently poisoned. They also argue—with a straight face—that people who eat venison from animals shot with lead bullets are somehow at a serious risk of lead poisoning.

It’s true that in a 2008 study supervised by the Centers for Disease Control and Prevention, several North Dakota researchers tested the blood lead levels of more than 700 residents, most of whom consumed game meat. This study found that North Dakotans who ate meat from wild game had slightly higher blood-lead levels than those who didn’t.

HSUS rushed to announce that “If there was any doubt about the urgent need to rid our country of lead ammunition, here is proof positive.”

But if you actually look at the North Dakota study results, you’ll find that subjects had average levels of just 1.17 micrograms of lead per deciliter of blood (1.17 μg/dL). That’s far less than the 10 μg/dL that the CDC considers “elevated.”

Absolutely nobody in the North Dakota study had lead levels at 10 or above. Their mean blood-lead level, in fact, was actually less than that of the population at large. And—get this—less than 6 percent of ground venison samples from processors examined by scientists contained any measurable levels of lead at all.

North Dakota’s Game and Fish Department concluded that it was “not recommending major changes for hunters” as a result of the study. But HSUS’s spin-doctors couldn’t let an opportunity to create public fear about hunting go to waste.

One thing a ban on lead ammunition would clearly do is drive up the costs of hunting (something HSUS wants). Lead shot and bullets can be replaced by a number of alternatives: steel, copper, bismuth, and tungsten, for example. One EPA analysis shows that all of these alternatives are significantly more costly than lead rounds. (The Billings Gazette notes that steel shotgun shells cost 64 percent more than lead ones.)

There’s also a question of ammunition performance. From my understanding, a harder steel bullet could simply penetrate through an animal instead of “flattening” upon impact the way softer projectiles do. This could lead to a higher rate of wounded animals that creep back into the forest only to die a more painful death. Not exactly a "humane" way to go.

Other options? Tungsten—adopted by the Army some years back as a “green” replacement for lead—turned out to be carcinogenic. And a 2004 Canadian study raised the possibility of bismuth’s toxicity too.

There are clearly up-sides and down-sides to just about anything. But much like HSUS’s strategy of raising the price of meat and eggs to discourage consumption and bankrupt farmers, the group seems to be trying to price as many hunters as possible out of their hobby.

Or maybe HSUS will suddenly be in favor of hunting as soon as everyone starts using expensive copper bullets.

Uh-huh. When Michael Markarian starts endorsing “humane ammunition” by slapping HSUS's logo on the box, I’m sure there will be a press release.