HSUS is Tax-Exempt (and So, Apparently, Is Its New Chief Fundraiser) - HumaneWatch 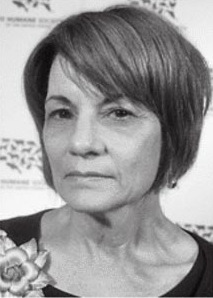 A few weeks ago we introduced you to Deborah Peeples, the Humane Society of the United States's new "Vice President of Philanthropy." (That's a fancy-sounding way of saying "chief factory-fundraiser.")

HSUS is exempt from paying federal income taxes. But apparently Ms. Peeples and her husband believe they're also "tax-exempt."

In the middle of an article discussing the ongoing feud between HSUS CEO Wayne Pacelle and our Executive Director, Saunders links to a document showing $87,164.60 in federal tax liens against Peeples. (We've added the document to the HumaneWatch library.) These liens appear to cover unpaid personal income taxes from 2000 through 2004. And they're still on the books.

Peeples's job is to hand out tax deductions like candy to HSUS donors. And she's such a big fan of the idea that she hasn't paid her own taxes.

Nice work if you can get it.

Click on the "Notice of Federal Tax Lien" below to see the documents. As the late Leona Helmsley (another notable animal lover) notoriously remarked, "Only the little people pay taxes."

People like you and us. And every gullible American who's ever given money to HSUS. But not Deborah Peeples. She's special. Remember that. 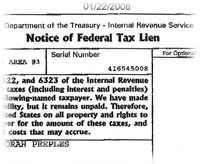