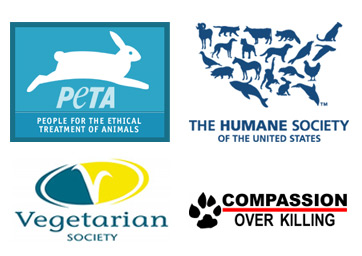 "Don't Eat Me," according to its Facebook page, is "an upcoming docu-film on animal rights and veganism."

The film's producer is an 18-year old Canadian woman named Nadia Masoudi. (Her father, conveniently, is a vegan who runs a video production and marketing company.) And according to a press release, she's also organizing "a world-wide event called Animal Freedom Day, which takes place on July 24th 2010."

This one is a doozy. It's pure vegan-utopia stuff, with a not-so-articulate adolescent writing style. Two of Masoudi's stated goals are:

Why pay any attention to what amounts to a high-school teenager's vanity project? For one thing, the multi-gajillion-dollar Humane Society of the United States is listed among Masoudi's sponsors, right alongside PETA, the Vegetarian Society, VIVA!, Compassion Over Killing, and other organizations with zero-compromise attitudes toward meat and dairy foods. (Side note: What the heck is the Comfort Inn hotel chain doing co-sponsoring this?) [Update 6/21/10 — Comfort Inn's logo has been taken down.]

Also, HSUS has already been promoting Masoudi (and her veganize-everyone goals) to its youth audience on its "Humane Teen" website.

It's not likely that this film (or its related ad hoc veggie holiday) will amount to much. So why would HSUS publicly hitch its wagon to it? Is the group getting sloppy about hiding its affinity for the whole vegan agenda thing? Or has Wayne Pacelle finally let HSUS come out of the closet and admit that it sings from   PETA's hymnal?

This should be fun to watch.