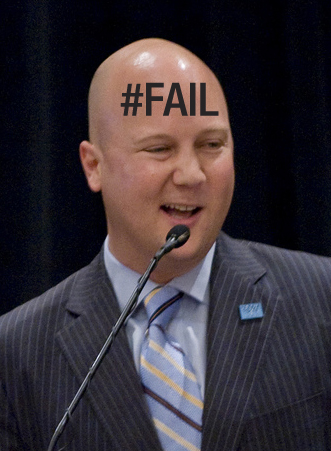 It’s election season, so it seems every YouTube video we click on has to be prefaced with a 30-second ad from one candidate or another. Plenty of them are positive, but there’s the usual slew of demagogic negative ads. And the Humane Society Legislative Fund (HSLF), the lobbying arm of the Humane Society of the U.S., has easily the sleaziest spot that we’ve seen thus far. It’s so bad that eight TV stations are refusing to run it.

The ad targets Rep. Steve King (R-Iowa) for voting against legislation that would ban people from taking kids to animal fights, deeming him “King of Cruelty.” Michael Markarian, an HSUS executive who also runs HSLF, wrote that the ad is “meticulously sourced with information documenting King’s voting record and statements.” But a TV station owner points out that King is on the record opposing all forms of animal fighting—a fact that HSLF omitted from the ad entirely:

A review of congressional records shows that King made it clear to his fellow members of Congress that he is opposed to all forms of dog fighting, but believes the issue is a state matter rather than a federal issue, [Citadel Communications President and COO Roy] Cole said. “The upshot is that this spot does not hold up to the light of day,” he added.

Specifically, King said in Congress: “I, too, oppose any kind of animal fighting.” (Video at the link.) Cole also called the message of the ad “patently false,” while another TV station executive objected to the “sensational tone.”

Kudos to them for insisting on truth in advertising. And while these Iowa TV stations are at it, they should make sure they’re not running HSUS fundraising ads, which are just as misleading and flimflam as this political ad.

Politics is full of muckraking and fast-and-loose hyperbole, but HSLF’s ad is a new level of skullduggery. Whether you think animal cruelty should be dealt with on the state or federal level is up to you. But it’s ironic to see HSLF attacks given that HSUS CEO Wayne Pacelle recently defended states’ rights to make their own agriculture regulations in attacking a Farm Bill amendment.

So HSUS will apparently say anything to push its agenda. No surprise there. HSUS misleads and deceives Americans to raise money, and now its lobbying arm does so for attempted political gain. It’s hard to imagine a shadier group short of a Bernie Madoff scheme.

We’re used to seeing PETA make ads so ridiculous that TV stations refuse to air them. Is it any surprise PETA’s wingnut allies at HSUS/HSLF have reached that level of sleaze?