HSUS Has a New Uniform in Ohio - HumaneWatch 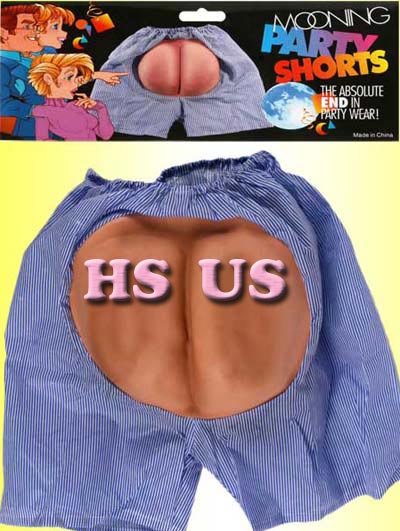 It's no joke. Just ask the mother of two who was exposed to the business end of two political signature-gatherers (paid by the Humane Society of the United States) recently in Ohio's rural Licking County.

Here's the report from Ohio's Coutry Journal. It's not appropriate for young children (or glute-o-phobes):

Lori was leaving the store after getting some groceries when she spotted the two male 20-something paid signature gatherers roaming the parking lot. They were trying to drum up support for the Humane Society of the United States (HSUS) ballot measure this fall …

She had a few words for them: “This is my county and my home and what you are doing will affect my farm, so get out of here.”

After putting her two very embarrassed children in the car and telling them “do not get out no matter what happens,” Lori went and confronted the signature gatherers, again asking them to leave. The two young men again refused to leave the private property (owned by Kroger), so Lori went and talked with the manager of the store. She found out that this was the second time in two days that the signature gatherers had been asked to leave so the manager advised that Lori call the police, which she did …

The two young men did not seem to like this at all. They offered Lori some choice phrases regarding her lips and where she should place them. Then, one of the young professionals proceeded to drop his pants and bend over to illustrate and offer clarity to his previous statement.

Shortly afterward, the police arrived and escorted the fine young men from the premises.

We're not just trying to crack wise here, or make HSUS the butt of some joke. This is serious business, and we must get to the bottom of it before HSUS gives every farmer in Ohio a bum rap—whether they live out in the country or in their county seat.

HSUS is opposing more than just pig manure and dairy-air. The group is standing against the people who put rump roast on our tables. But all they're managing to do, of course, is make asses of themselves.