HSUS: (Not) Doing Its Part for Shelter Animals - HumaneWatch 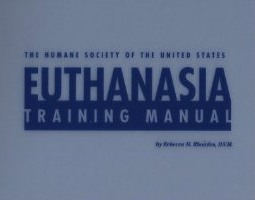 HumaneWatch is run by the Center for Consumer Freedom, which also runs the popular website PETAKillsAnimals.com. Since its inception a few years back, it’s gotten well over 4 million visitors. Most people are shocked to learn that a group for the “ethical treatment” of animals kills 2,000 dogs and cats a year—about 95 percent of the dogs and cats it takes in, in recent years.

As far as we can tell, HSUS itself doesn’t directly kill animals like PETA does. (PETA operates an “animal shelter,” something HSUS doesn’t even do.) But that’s not to say HSUS doesn’t help euthanasia efforts.

HSUS publishes a Euthanasia Training Manual, available on Amazon for $19.95. HSUS also co-produced an online video program, along with its quasi-legitimate university arm, on euthanizing pets and wildlife (only $129), as well as a separate workshop (for $190).

HSUS would likely reply to criticism by saying that euthanasia is presently a necessary evil. And we understand that argument. But coming from HSUS, it has a certain hollowness to it.

HSUS raises over $130 million from the public annually, yet gives only 1 percent of that to pet shelters. It doesn’t run any pet shelters. And the animals it does rescue, it dumps off at local shelters, sometimes with poor results.

So it would mean more if HSUS put more of its money into stopping euthanasia in the short term, whether that’s directly opening several pet shelters or giving more funding to shelters to allow them to keep more animals alive.

However, HSUS is all too happy to keep raising money off the backs of these dogs and cats. And it’s all too happy to write in fundraising letters that state, “It’s so hard to believe…that over 4,000,000 dogs, cats, puppies, and kittens die each year simply because no one loves them.”

Comforting words, we’re sure, to the dogs and cats that are put down while HSUS vacuums up donations.