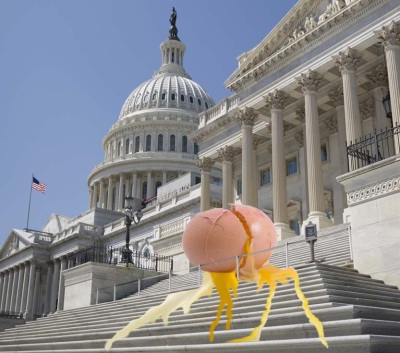 There’s big news in the animal agriculture world today: The Humane Society of the United States (the world’s richest animal rights group) announced an agreement with the United Egg Producers (the nation’s largest egg trade group) to support federal legislation mandating a national shift in how egg-laying hens are housed. Both groups will support a new legal requirement for “enriched” (larger) cages by 2030. Everyone expects Congress to pass the law next year.

Just yesterday the Oregonian reported that HSUS believed an enriched cage “barely improves the quality of life for hens.” Yet today HSUS is endorsing a switch to those very cages. Did HSUS have a change of heart overnight? We doubt it.

From what we can see, the game is far from played-out.

There are a few dynamics at work here:

Feedstuffs reports: “Talks between the two parties started after HSUS said it recognized that there were benefits to colonies, reversing a position that it only supported cage-free egg production systems.”

It must be truly embarrassing for HSUS—and disheartening to the group’s devoted animal “liberationists” — to have to retreat from a principled (if wacky) position and agree to support confining hens in cages for the foreseeable future.

HSUS will argue from a practical point of view that it’s doing the most good for the most number of hens at the moment, but the result will scramble its credibility in the animal rights movement.

There are also some signs that egg farmers shouldn’t be jumping for joy just yet.

Former PETA vice president Bruce Friedrich announced that his new employer, Farm Sanctuary, supports the enriched-cage legislation on practical grounds, but his group still opposes the actual enriched cages. And, of course, its leaders (like PETA’s and HSUS’s) oppose actually eating eggs of any kind.

We’ve used Friedrich before as a placeholder for HSUS. Even the radical Friedrich (who once said “blowing things up and smashing windows [is] a great way to bring about animal liberation”) is taking the practical approach here: Take an inch, but continue to push for a mile.

As HSUS “Outreach Director” Josh Balk said at the group’s 2009 annual conference, “Anyone who says that cage-free is 100% humane, 100% cruelty-free, just know that’s not accurate.”

We’re sure all of HSUS’s leaders still believe that.

HSUS will be back for egg farmers. Its stated goal is to “get rid of the industry.” But in the meantime, there are plenty of pork, beef, veal, and dairy farmers to hassle.