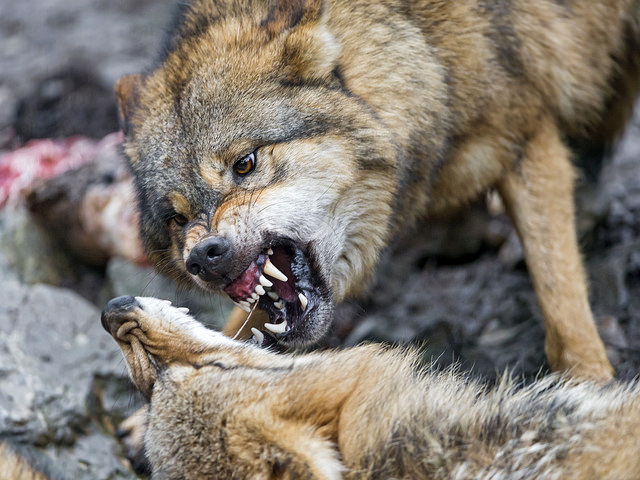 A wolf in Duluth, Minnesota, brutally attacked and killed a family’s dog last week, and if the Humane Society of the United States (HSUS) has its way, we can only assume incidents like this are going to happen a lot more often.

Terry Irvin was walking his dog Leo, an 11-year-old retriever-corgi mix, along a wooded trail near Lake Superior – something he does two or three times a week – and decided to let the dog off its leash. Irvin told the Star Tribune he got a little bit ahead of the dog and waited around for him to come, but the dog never made it.

After about five minutes went by, Irvin turned around and went to look for Leo. “I walked into the woods, and I saw him,” Irvin told the paper. “It was a traumatic sight. I will never forget it. … It was heartbreaking.”

Keith Olson, a conservation officer with the Minnesota Department of Natural Resources, called the attack rare, but said they are happening a lot more often than they used to. There are estimated to be around 2,400 wolves in Minnesota, but very few options available to control them thanks to legislation pushed by the HSUS that put wolves back on the Endangered Species List.

The federal government had tried to de-list gray wolves beginning in 2003, when the wolf population reached a sustainable level – the federal recovery goal for Minnesota wolf numbers is around 1,300. It finally succeeded in 2012, but the HSUS quickly filed a lawsuit and the wolves were back on the Endangered Species List by the end of 2014.

Under the law, it is illegal to kill a wolf unless it is in the defense of a human life – even if a dog is being eaten alive. This leaves pets in serious danger as wolf populations continue to outgrow their food supply. Deer are by far the largest food source for wolves, and with deer numbers down across Minnesota, wolves are hungry and prowling for pets. There were 18 reported wolf attacks on dogs in 2015, far more than in years past.

An HSUS lobbyist tried to push similar legislation in Oregon last month, but Lawmakers weren’t convinced, noting that some of the most horrific footage they’d ever seen came in the aftermath of a wolf attack that left dozens of sheep disemboweled, not from a hunter with a dead animal.