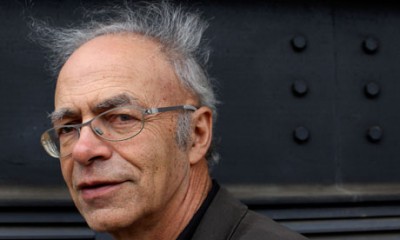 The weekend before last the Humane Society kicked off its “Future of Food “conference in Washington D.C. The event was held in a large hotel ballroom and promised to revolutionize the way you think about food. We, of course, went so that we could report back on what we observed.

The excitement was palpable as guests arrived early to receive their HSUS goody bag as well as partake in a cocktail hour before the main event of Friday night: Keynote speaker Peter Singer. The excitement for Mr. Singer was quite noticeable as the largely affluent guests sipped their cocktails and discussed what this could mean for the “Future of Food.”

For those who don’t know who Singer is, he is the author of Animal Liberation, a bible of sorts for those in the animal liberation movement, which seeks to end the moral and legal distinction between humans and animals.  HSUS’s choice of Singer as their keynote speaker, is just another indication of their march towards a complete moratorium on modern animal agriculture.

After about three hours of drinking, egotistical banter, and a slightly awkward moment when a journalist was kicked out, the guests were finally let in to see the man of the hour.

Singer kicked off the event by focusing most of his speech on his laundry list of issues with the entire process of animal agriculture. He condemned farmers for their farming practices, blaming them for much of the animal suffering in the world, as well as for climate change.

But farmers were not the only ones who felt the scorn of Singer’s blunt rhetoric, Singer also went on to rant about those who had only partially gone vegan. He railed against those who ate less chicken and more beef as being complicit for climate change, and those who have switched from beef to chicken as being responsible “for considerably more suffering than if they had stayed with red meat.” The audience began to squirm in their chairs as Singer continued to lambast them for their lack of piety to the cause.

The calling out of heretics continued during Day 2 as speaker after speaker laid out their condemnation of those who hadn’t completely abdicated their preference for meat-based protein.

Several speakers like Susie Weintraub of Compass Group echoed Mr. Singer’s vision of a meatless world by suggesting a plan to “start with the progressive open minded people and then bring it into the mainstream. Begin it with meatless Monday and eventually let it morph into getting us all off meat.”

Weintraub even offered a more technological alternative to getting people to eat a meat alternative (“meat” grown in a lab with no animal products) by suggesting that they “push it into the supply chain and you don’t even tell people that it is a clean meat, basically grown in a lab.”

Elsewhere, the audience heard from an executive with Hampton Creek—a vegan fake-egg company that HSUS has invested in that is also reportedly under federal investigation for investor fraud.

But one thing was glaringly missing from the various HSUS speakers: The individual consumer. What about our choices? From the speakers’ various attitudes and statements, it’s clear that HSUS’s future of food doesn’t have room for disagreement.