The Humane Society of the United States is running one of its annual fundraising promotions for the next few weeks: a “Spay Day” photo contest.

Spay Day was created by the Doris Day Animal League (DDAL) in 1995; HSUS absorbed the program, along with the rest of that organization, in 2006. 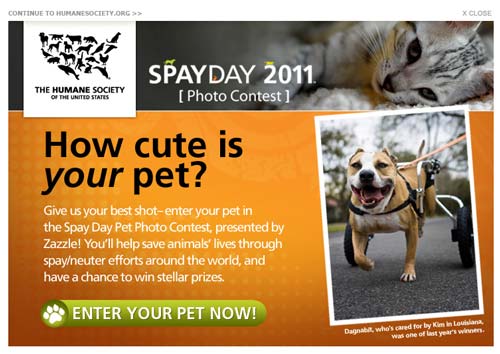 Here’s how it works this year: You submit a cute picture of your pet, you add your contact info to HSUS's gargantuan mailing list, and then you encourage your friends and family to “vote” for your photo.

But unlike with American Idol voting, it’s not free. (Naturally.) HSUS is charging $1 per vote, with a minimum of five votes per voter.

The contest’s “official rules” state that “Any donation or purchase made by you will not increase your chances of winning.” Which seems like a sneaky way of saying that only contributions by your family and friends can buy you a prize.

Now, to be fair, HSUS says it’s not keeping the money:

These “organizations,” we understand, are the local spay/neuter events that HSUS is also encouraging people to organize during the contest period. Fair enough. Good work all around.

But why is HSUS passing out more of your money for spay/neuter grants, instead of donating its own cash (which, of course, was also once your cash)? Like HSUS’s “evaluation” reports that cost pet shelters $25,000 a pop, this is something HSUS could easily be doing for free, without putting its hand (or paw) out.

And it’s not like it would be a particularly heavy lift. In August 2010, HSUS reported on last year’s event:

Spay Day 2010 photo contest voters raised more than $253,000 for 225 U.S. event organizers, which organizers estimate will allow them to spay or neuter more than 8,500 additional animals.

Why doesn’t HSUS just announce its own donation of 50 cents per vote, with a $300,000 cap? Everyone could avoid the $5 minimum. You’d have a potential for 600,000 votes cast. (HSUS could discourage repeat voting with browser “cookies.”) And everyone—not just 51,000 people from HSUS’s existing donor base—could participate.

Of course, it could be embarrassing if only 51,000 people showed up for free voting. And HSUS wouldn’t collect any money, or the mailing list that comes with it (which is even more valuable).

The other thing that grabs us about the aftermath of last year’s Spay Day is HSUS’s enthusiasm for raising enough money to spay or neuter “more than 8,500” pets.

Here’s a little perspective on that, courtesy of a February 22, 1997 news release from DDAL (emphasis added):

Spay Day USA has been designated as a time to encourage every humane American to take one dog or cat to a veterinarian to have the animal spayed or neutered. During its first two years, Spay Day USA resulted in more than 70,000 cats and dogs being spayed and neutered. The 100,000 mark should easily be exceeded during Spay Day USA 1997 …

You get the idea. Before HSUS took over, Spay Day was about providing free services in the community. And the sponsoring organization spent money (not raised it) to do the right thing.

In 2001, DDAL’s Spay Day press release reported that “almost one half million animals have been altered in conjunction with Spay Day USA since its inception in 1995.” That’s about 70,000 per year.

But a few years after HSUS took over DDAL, its expectations were far lower. That year’s HSUS press release reported that “more than 30,000 animals across the country are expected to be spayed or neutered as part of Spay Day USA 2008.”

So HSUS is settling for less than half the spay/neuter results it used to see, it’s not spending its own money to help “fix” dogs and cats, and you’re expected to donate to make your pet part of the promotion. No wonder people say HSUS is run by the bean-counters.

The bottom line? If you have $5 to spare and you'd like to help spay and neuter animals, donate it to a pet shelter in your community. Your local shelter shouldn't have to wait to collect its fair share until HSUS does its bookkeeping. Sure, you won't be able to plaster your favorite snapshot of Fluffy or Fido all over the Internet. But isn't that what Facebook is for?

Update: USA Today reported in 2009 that the HSUS "Spay Day" campaign's success has been even less consistent than we thought:

The "Spay Day" drive raised $600,000 from about 40,000 participants, said Carie Lewis, the Humane Society's Internet marketing manager. It's uncertain how much was generated through Facebook. But this year's campaign, the first to use the application and other widgets, was more successful than previous ones. In 2008, the 31,000 participants raised only $72,000.