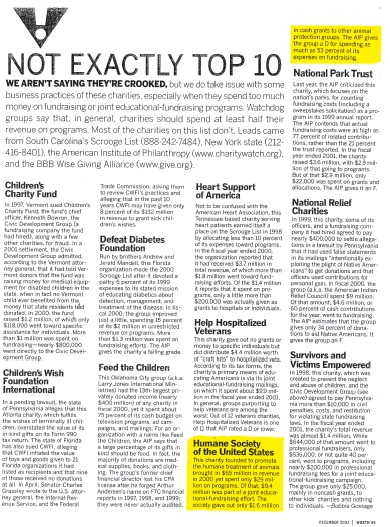 The Humane Society of the United States is a scam that engages in bad practices. HSUS uses deceptive advertising to solicit donations. HSUS also dupes donors by using an accounting trick known as “joint cost” accounting. In short, it classifies some of its fundraising costs as “program” costs. This makes it look like HSUS spends 75 percent or more of its budget on programs, when in reality the figure is lower. Much lower.

When called out on this, HSUS hides behind a few charity evaluators. It points to a decent rating from Charity Navigator—but this service takes financial data at face value, overlooking HSUS’s “joint cost” shenanigans. HSUS points to being “approved” by the BBB’s Wise Giving Alliance—but the WGA takes $15,000 a year from HSUS, so that indicates a clear conflict of interest. And lastly, HSUS points to the fact that Worthmagazine named it a top-10 “fiscally responsible” charity a few years back.

Well, well. It turns out that Worth magazine has also named HSUS on a top-10 list of terrible charities in America. (Click the image to enlarge.) Why?Worth docked HSUS for using these very same donor-duping sleights-of-hand—the accounting gimmicks HSUS continues to use. Worth also noted that HSUS gave a pittance of the money it raised to animal protection groups—something that is also still true.

Why did Worth later rate HSUS a top-10 “fiscally responsible” group? For two flawed reasons. First, it asked Charity Navigator for help—and as we mentioned above, Charity Navigator employs rather feckless analysis. Second, the magazine states that HSUS had enough money in reserve to operate for two years. In other words, HSUS has a nice load of cash stored away in the bank and in equities. But what about stopping animal crueltynow, in the present, as HSUS donors want? Isn’t having two years’ worth of money stuffed away fiscally irresponsible when pet shelters are euthanizing 4 million cats and dogs a year? We certainly think so.

Worth had it right in its previous evaluation, which also noted that at the time HSUS got a “D” grade from the American Institute of Philanthropy. Guess what? HSUS still gets a “D” grade from AIP, which calculates that HSUS spends as little as 50 percent of its budget on programs.

That’s pathetic. And so are HSUS’s continued attempts to deflect criticism and dupe Americans.