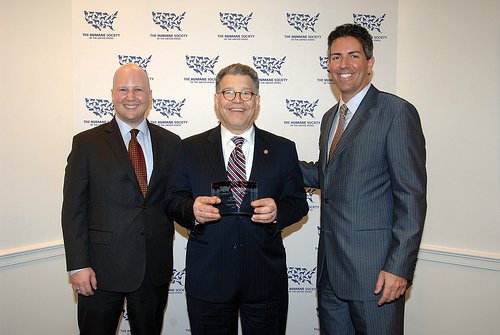 You may remember that a few weeks ago, Humane Society Legislative Fund president Michael Markarian made a big deal about how he was giving "Humane Legislator" awards to 131 members of the U.S. House and Senate—including a grand-prize winner who turned out to be a one-man wildlife wrecking crew.

The awards "ceremony" wasn't a glitzy bash at the Washington Hilton. it consisted of a closed room and a photo-op for any of the "winners" who didn't mind posing with Markarian and HSUS president Wayne Pacelle. So we wondered how many awardees took ten minutes out of their busy schedules and actually showed up.

Thankfully, Markarian did a little bit of self-promotion with a photo gallery on his Facebook page, so we know the answer: Just 37 of the "Humane Legislators" (24 Democrats and 13 Republicans) thought it wasn't political suicide to be photographed with their vegan overlords. That's 28 percent. Will it help or hurt in November? Only their pollsters know for sure.

And by all means, if your Congressional representative is listed here, let him or her know how you feel about it.