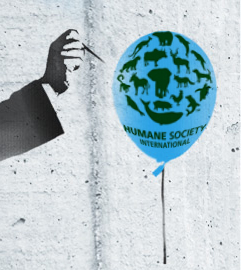 When the Humane Society of the United States (HSUS) and its global arm Humane Society International (HSI) had their ratings downgraded by Charity Navigator last month, HumaneWatch was the first to report the news widely.

We were stunned to see HSUS with a lower charity rating than PETA, and HSI's abysmal 1-star overall rating just added insult to injury. Today's news is more of the same.

If an organization owes more than it owns, that's a bad sign. If the bills it owes by the end of the year are more than it can pay, that's an even worse sign. These 10 charities are insolvent. Not only do their total liabilities, or what they owe, exceed their total assets, they also maintain negative working capital — that is, the bills they owe exceed available assets that can be used to pay those bills. While these charities may not be facing bankruptcy, their fundamental insolvency puts these charities in a very dangerous position.

HSI, the organization reports, is $11.7 million in the red. It's drowning in more than 5 times the red ink of its next worst-managed competitor.

And as of this writing, HSUS itself is #2 on a different list: the Charity Navigator pages that have attracted the most comments from the public. With all the scandals swirling around the wealthy animal rights group, it's easy to see why.