I Dare You to Disagree with Mike Rowe - HumaneWatch 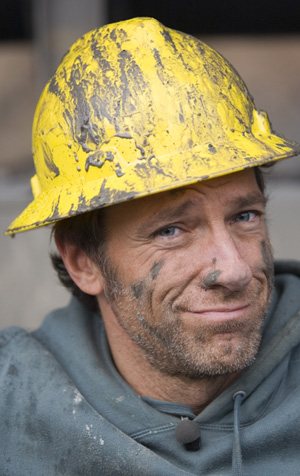 Does anybody not like Mike Rowe? The filthy-handed Dirty Jobs host is equal parts Paul Bunyan, Ralph Kramden, and Andy Griffith. And this cable-television everyman has some pretty strong feelings about how the Humane Society of the United States views the future of American farming.

Here's Rowe, wiriting about the 2008 "Proposition 2" political campaign that already has some California egg farmers scouting land in Guadalajara:

I don’t believe that keeping a chicken in a cage, free from bad weather or predators and feeding them well and making sure they stay healthy is a bad thing. My grandparents had chickens.  I know what the chickens did all day and what they were happy doing and it didn’t include much else besides eating, “talking” to all their pals and laying eggs.  Seriously (no disrespect to all the chickens out there) …

I love animals. I also love to eat and my favourites include a good steak for dinner and bacon and eggs for breakfast and I’d prefer not to spend a fortune on those things or get my beef and eggs exported from some other country.  Nothing wrong with all that, right?Then what smacks me in this [Wall Street Journal] article is this:

“Of course, moving to another state could be costly, too. Moreover, Wayne Pacelle, president and chief executive of the Humane Society, said farmers who flee California may wind up facing tougher rules anyway, because more retailers are seeking food raised under strict animal-welfare standards.

“It’s not surprising that some of the factory farms would flock to states that are deregulated when it comes to animal welfare,” said Mr. Pacelle. But “that is not a long-term answer.”

Maybe it’s just me but Mr. P’s “that’s not a long term answer” comment sounds like it carries a threat. What does that mean? Is Mr. P and the Humane Society and all the well meaning animal savers going to go get these laws passed in every single state in the nation so that one day we wake up and every single farmer is out of business unless they grow vegetables? Are we going to go from watching the ruin of the auto industry to watching the ruin of the farmer? I ask you – what is in America’s future?

For anyone who watches Mike Rowe, none of this should come as a surprise. Except, maybe, the fact that he spells "favourites" with a "u."

His point, though, is well taken. If you were to look at what HSUS did in California (and is doing this year in Ohio), and you didn't know the organization was a chicken's-rights lobby, you might conclude that their chief interest is in getting as much as possible of our domestic animal farmers to pick up and move—as far away as possible.

Is that good for America?

Would it even be good for the chickens? It's not like the Mexican countryside is dotted with the most humane, stewardship-oriented farms in North America. We'd argue that those farms are here in the United States.

What do you think?