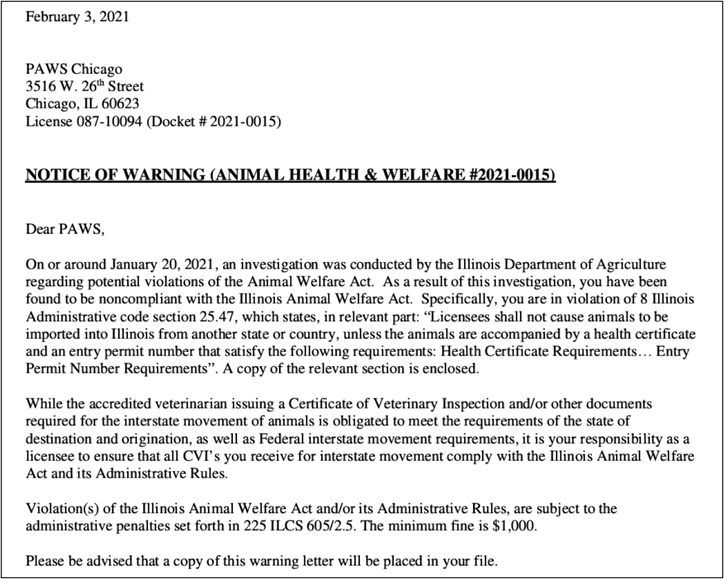 Many rescues do great work. But there are many reports of rescues that do things the wrong way–which can have deadly consequences for pets.

In 2015, animal rescuers introduced Asian dog flu to the United States for the first time. Ground zero was Chicago, where over 1,000 pets ended up getting sick and several died. Asian dog flu has since spread across the country courtesy of reckless rescues.

That should have been a clarion call to Illinois rescues that it’s important to follow regulations–especially ones designed to reduce the risk of spreading zoonotic diseases.

Yet we have learned that PAWS Chicago, one of the largest rescues in the state, was investigated for illegal pet imports last year and reprimanded by the state department of agriculture, which oversees animal shelters and rescues.

According to documents we uncovered through an open records request, in January 2021 the Illinois Department of Agriculture opened an investigation into PAWS Chicago after receiving a complaint the shelter was importing animals without proper permits.

In Illinois, imported pets must be accompanied by a Certificate of Veterinary Inspection. This is to ensure the general welfare of the animal, but also to ensure that the animal is not sick.

After an inspection, the state found that PAWS Chicago was indeed in violation of the law and issued an official warning.

“On or around January 20, 2021, an investigation was conducted by the Illinois Department of Agriculture regarding potential violations of the Animal Welfare Act. As a result of this investigation, you have been found to be noncompliant with the Illinois Animal Welfare Act. Specifically, you are in violation of 8 Illinois Administrative code section 25.47, which states in relevant part: ‘Licensees shall not cause animals to be imported into Illinois from another state or country, unless the animals are accompanied by a health certificate and an entry permit that satisfy the following requirements: Health Certificate Requirements…Entry Permit Number Requirements,’” the IDOA’s letter stated.

Many rescues do good work and play by the rules. But the field of animal rescue is woefully underregulated.

Spreading disease is a common problem. In 2005, an outbreak of disease at Anderson Animal Shelter, a shelter in Elgin, killed nearly 100 cats. The “business model” of rescues is often to import animals from overseas. Along with the dog flu situation described above, rescues spread canine brucellosis to Wisconsin by importing dogs from abroad.

Another problem is “retail rescue”–a scam where a group claims to rescue animals, but they’re really just trafficking animals for profit. This has become particularly lucrative as animal rights groups have passed laws banning pet stores from selling animals, and only allowing shelters and “rescues” to be the source of puppies.

In one infamous incident, 38 French bulldog puppies died on a flight from the Ukraine to Canada. In total, 500 of these puppies were on the flight. If you think there are stray French bulldog puppies running around the streets of Kiev, we have a beach house in North Dakota to sell you. This is clearly a case of “rescuers” importing dogs–possibly from puppy mills in Eastern Europe.

The CDC has identified sham rescue as a problem: “Many dogs are bred irresponsibly in large numbers in “puppy mills” overseas, where the risk of congenital abnormalities and disease is high. Importers then fly them as cargo in large batches, claiming them as “rescue” dogs, valued at $0 on their paperwork, and allowing the importers to evade entry and broker fees. If the illegal puppies enter the United States, they are marketed to the public through social media such as Facebook and Twitter, or even on legitimate-looking US breeder websites.”

We’ve even heard stories of rescues that discriminate against people who want to adopt–for example, by denying pet adoption to senior citizens.

Animal rescue is an important function, but it must be done humanely and ethically. And that means more regulation and enforcement is needed. 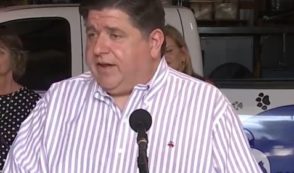