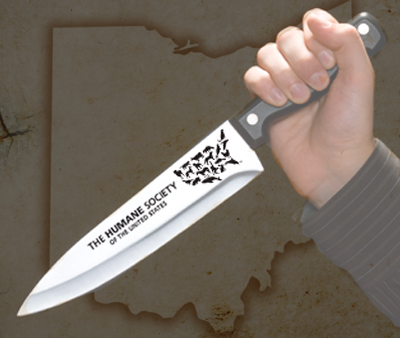 Ohio has been a battleground between farmers and the anti-farmer Humane Society of the United States. In 2009, farmers and ranchers backed a successful ballot initiative to create the Ohio Livestock Care Standards Board (OLCSB), which would govern animal agriculture practices in the state. HSUS didn’t like that people who are outside the professional animal-rights industry could have a say on what “humane” means, so it threatened its own ballot campaign to overturn the measure. The Ohio Farm Bureau, then-Governor Ted Strickland, and HSUS then cut a deal, the “Buckeye Compromise.” Instead of abolishing the OLCSB, HSUS and the Ohio Farm Bureau agreed to give HSUS what it wanted in the standards — like a ban on individual maternity pens that reputable veterinarians find provide for the welfare of pregnant pigs – while keeping the board.

The board kept up its end of the bargain, which you can read here.  (The only HSUS demand that it hasn’t gotten yet is a law increasing penalties for animal fighting.) But is that good enough for HSUS? Of course not. Now, HSUS has appointed a new state director for outreach and engagement in Ohio, John Dinon. He’s no animal fighting specialist brought in to help shepherd a tougher anti-cockfighting law. The Toledo Blade reports:

John Dinon, who left the Maumee-based group in September, will be Ohio director of outreach and engagement, a new position for the groups. He will be based in Toledo and will focus on a variety of animal protection issues with an emphasis on supporting humane and sustainable animal agriculture in the state.

“Humane and sustainable” agriculture is code for “attacking regular farmers” through a campaign resting on the false premise that mainstream farmers are treating their animals inhumanely or degrading the environment. Even though HSUS has already received timelines for the achievement of its stated “Buckeye Compromise” demands, HSUS will not leave Buckeye State farmers alone.

It’s just another case of HSUS being a dishonest broker. Even as HSUS and the United Egg Producers advance a “deal” on enriched-cage hen housing, HSUS is pushing companies to a cage-free standard. Not that “cage-free” is good enough for a group of vegan zealots– HSUS really wants to get rid of eggs altogether. Of course, a then-HSUS VP vowed to “get rid of the entire [animal agriculture] industry,” and HSUS’s current farm animal VP has said that “eating meat causes animal cruelty,” so it was really only a matter of time before HSUS made a move.

Maybe it seemed sensible in 2010 to deal with HSUS and avoid a battle. But HSUS can be beaten, as evidenced by three high-profile political flops performed by HSUS just three months ago. These guys will take a mile if you give them an inch, and sometimes the best antidote for a schoolyard bully is to just stand up to them.

As Winston Churchill said, “An appeaser is one who feeds a crocodile, hoping it will eat him last.” We will soon find out just how hungry a crocodile HSUS’s Ohio division is. In the meantime, it’s more evidence to anyone considering a “deal” with HSUS that these guys are as trustworthy as Benedict Arnold.