Is Vegan Kibble a Form of Animal Cruelty? - HumaneWatch 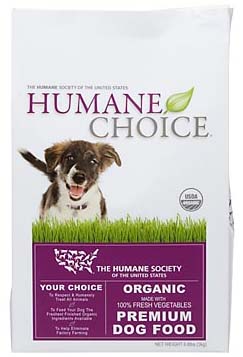 UPDATE: The Humane Choice website states that “it does not contain any meat, dairy, or eggs. However, it does contain three essential micronutrients (Vitamins A, B12, and D3) that may come from animal-based sources.” We understand this to mean that the dog food is vegetarian but not necessarily vegan.

If you haven't heard yet, the Humane Society of the United States has started marketing its own private-label vegan dry dog food, called "Humane Choice."

"Vegan" and "dog food" go together like "ketchup" and "chocolate pudding." Yes, like lots of other writers, we're really not sure where to begin with this horrible, horrible idea.

Dogs are not vegetarians. Ever heard of canine teeth? Yeah, those flesh-ripping pointy things in your dog's mouth. Not for tofu.

We've spoken to three different veterinarians in the last 24 hours. They all tell us that they would never recommend this product to anyone because animal protein is simply a better option for dogs than soy protein. (Feel free to weigh in if you disagree.)

The whole thing is reminiscent of the family in the short-lived animated TV show The Goode Family. They keep their pet, a perpetually hungry dog named "Che" (of course…), on a vegan diet. And as a result of his forced meatless eating, little Che sees visions of drumsticks and hot dogs everywhere. Including every time he looks at the other neighborhood dogs.

Then there's the sourcing issue. HSUS is paying a company in Uruguay to make this dog food. And then shipping it more than 5,000 miles to the United States. Why? 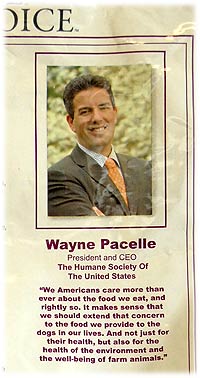 The manufacturer states that the formula was approved by Uruguay's "MGAP" (the Ministry of Livestock, Agriculture and Fisheries). We're not terribly comforted by that. Why wasn't the U.S. Department of Agriculture asked for its approval? (Or maybe it was.)

And the back of the bag has a smiling picture of Wayne Pacelle on it. (Really, Wayne? Who does that? Is that supposed to make the dogs hungry?)

Oh, yes. We do have a bag of this dog food. It arrived yesterday.

We first heard about this product back on October 29, when Pacelle told a Los Angeles “town hall” meeting that it was on the way. And he was right. The bag we ordered a few weeks ago was stamped with a manufacture date from last August. (Is that normal? Anyone in the dog food distribution world, please weigh in.)

Aside from the veterinary nutrition-related question marks, we're mostly concerned about the safety of feeding this product to anyone's pet. It was made 5,000 miles away, after all, and our own government's food-safety authorities haven't certified anything about it. Only that it's organic, which is really just a marketing tool. (So sayeth the USDA.)

We think it may be time to organize a "Humane Choice Challenge" to see if real dogs will actually eat this stuff. Something tells us that "organic ground canola seed" just won't get the saliva flowing like the smell of bacon.