It&apos;s Getting Harder to Tell PETA and HSUS Apart - HumaneWatch

If you have a pulse and you watch television, chances are you’ve seen the misleading Humane Society of the United States ads asking for “just $19 a month.” They’re misleading because HSUS sends just 16 cents of your $19 to a hands-on pet shelter. (It also doesn’t run a single pet shelter of its own.)

That $19 a month must be a magic number in the world of direct appeals. Now PETA (People for the “Ethical Treatment” of Animals) has a new ad asking viewers to donate the same amount. And the ad’s visuals are right out of HSUS’s playbook.

If nothing else, we give PETA credit for running ads that are more honest than HSUS’s. But that’s not saying much. 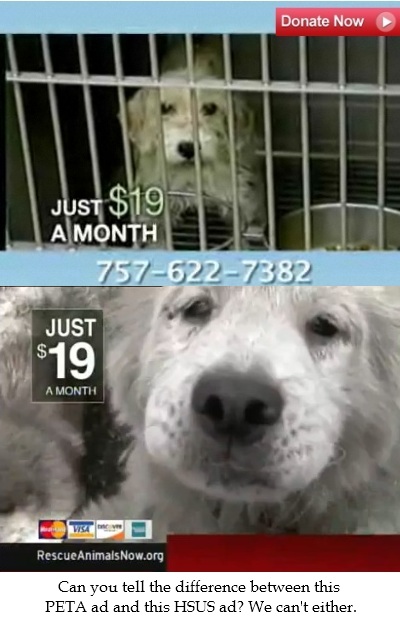 In one recent HSUS TV ad, 95 percent of the on-screen animals—all but 2—were cats and dogs. Since less than 1 percent of HSUS’s budget consists of direct financial support of pet shelters, this doesn’t pass the smell test. (We know, we know … pictures of cows, pigs, and chickens don’t make wallets pop open.)

PETA’s ad, on the other hand, shows farm animals and fur-bearing animals. The animal rights movement’s overall goal—shared by both PETA and HSUS—is to eliminate humanity’s use of animals. This includes food, clothing, and even life-saving medical research. So if you give to PETA, at least you know something about what you’re supporting.

Of course, it’s not like the money PETA raises will go to pet shelters either. PETA kills thousands of adoptable dogs and cats in its care every year (and even has a walk-in freezer to store the cadavers). On HSUS’s side of the ledger, sharing an appropriate amount of money with pet shelters (say, 50% of its income?) would undoubtedly save the lives of tens of thousands, if not hundreds of thousands, of dogs and cats every year.

It’s telling that CNN, Lifetime, and even Animal Planet are all refusing to run PETA’s ad. This is likely due to PETA’s notorious reputation more than anything else.

But the PETA ad itself looks just like an ASPCA or HSUS ad. Why would those cable channels run HSUS’s misleading ads and ban PETA’s? Someone should ask them.