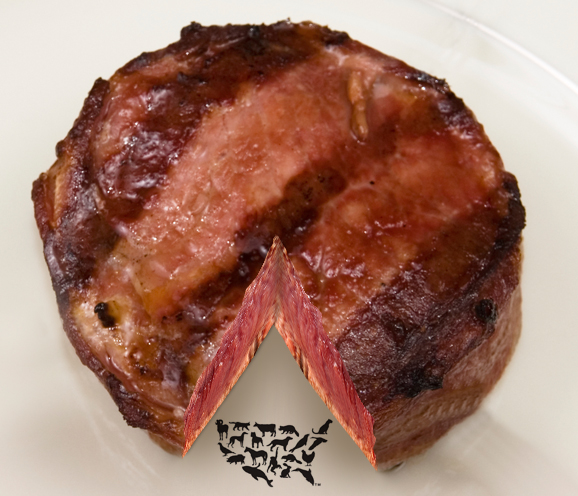 The Humane Society of the United States (HSUS), not to be confused with a humane society pet shelter, puts up a façade that it actually supports “humanely raised” food products. In reality, HSUS is a vegan group—it just won’t say so because 99 percent of the public doesn’t have an ideological problem with eating cheese.

HSUS’s mask slips every now and then, however, such as when HSUS Food Policy Director Matt Prescott gleefully wrote last month that a decrease in meat consumption is “good news.” (Not surprisingly, Prescott’s piece was quickly tweeted by former PETA VP Bruce Friedrich.)

Prescott was writing to promote HSUS’s Meatless Monday campaign, which is named after a similar movement started by Johns Hopkins Bloomberg School of Public Health a few years back. That’s the joke, of course: HSUS wants Meatless Monday through Sunday. It just uses the limited “Monday” angle to appear moderate.

Here’s some food for thought: The goal of the Meatless Monday campaign is to, essentially, reduce meat consumption by 14 percent by getting people to eat 1/7th of what they currently consume. Prescott reports that meat consumption is expected to have fallen by 12 percent this year compared to 2007.

Remember, the goal of HSUS is to eliminate using animals for meat (or eggs, or dairy). An HSUS VP was very clear: “We don’t want any of these animals to be raised and killed.” Even if meat consumption dropped by 90 percent, Prescott and HSUS would still be saying “eat less meat” and still trying to bankrupt the few livestock farmers left. Yes—even the family farmers HSUS claims to favor. (And of course, they’d be cheering the “good news” of bacon’s demise all the way to the salad bar.)

HSUS deflects claims that it has a vegan agenda by saying that 95 percent of its members are not vegetarian. However, soon after Wayne Pacelle (HSUS’s first vegan CEO) took the reins in 2004, he reportedly created a no-animal-products-in-the-office policy. Additionally, HSUS has a corporate policy not to serve any food products from animals—even humanely raised organic products—at any HSUS events. Employees aren’t supposed to expense food products from animals, either.

So let’s get this straight: HSUS won’t recognize 95 percent of its members’ own values (who have no problem eating meat), much less the values professed in public by HSUS’s leaders to support family farmers. Pacelle is all too happy to speak of “so many small farmers who are honoring that standard of animal husbandry and properly caring for their animals.” Just don’t expect HSUS to put its money where its mouth is. Or Pacelle to put his mouth where his mouth is.

If HSUS actually believed there is such a thing as humane meat or ethical eggs, it would buy some. It doesn’t.

Prescott himself is a former PETA activist. And now this guy is HSUS’s “Food Policy Director”? That shouldn’t instill confidence in any farmer—much less the 99 percent of consumers who don’t share the HSUS/PETA values for eating.